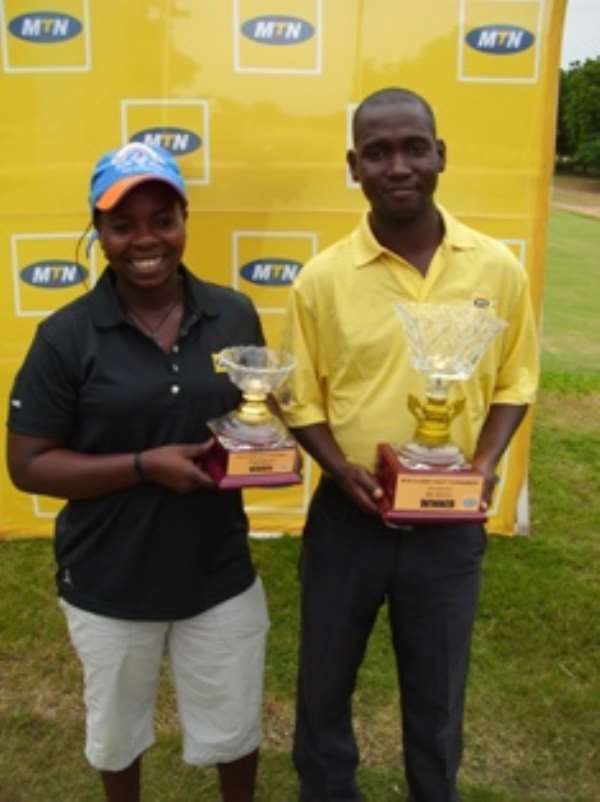 Klah with 67 net beat Samson Attiogbe who had 69 net by two strokes to run away with the ultimate prize of a giant trophy, a Blackberry cellular phone and MTN souvenirs.

Attiogbe who defeated P. K Amenyo by just a stroke on the other hand received a trophy, a Huawei Ideos phone as well as souvenirs from the sponsors of the competition, MTN.

Young Jessica Tei won the Ladies 'A' event after recording a 76 net, with compatriot veteran Susie Abaloo Kumassah had 78 net with Esther Amedzro getting 79 net following in that order.

It was Ako Odotei with 66 net who reigned supreme in the Men's 'B' category with Richard Boateng and Tang Wei following with 67 and 70 net scores respectively.

Galley Patrina finished first in the Ladies group 'B' event with 79 net score while Cherie Hammond with just a stroke shot placed second.

Michael Ikpoki, Chief Executive Officer of MTN commended the participants, especially those who excelled for the massive output and performance and promised his outfit's continued support for development of golf in the country.

He promised to support the MTN Classic event for the Tema Club for the next three years running and announced that plans are far advanced for the sponsorship of the Ghana and Accra Opens at the Celebrity Golf and Achimota Golf Clubs respectively.

Nduom US suit: We're deeply sorry – PPP apologises to all Ma...
33 minutes ago