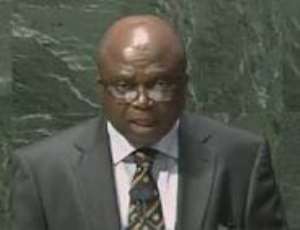 He said the Youth Parliament would be government's dedication to inculcate in the youth, principles of good governance, leadership and democratic values for active participation in decision-making process at all levels of national life.

Mr Humado said as a prelude, government through the National Youth Authority launched the Ghana Youth Consultative Assembly this year.

He explained that the Youth Consultative Assembly was to create a platform that would enable the youth participate in decision making processes particularly on issues that affected their development.

Mr Humado announced this at the opening session of the Eighth African Governance Forum (AGF-VIII) on the theme: “Youth Empowerment, Elections and the Management of Diversity in Africa”, being jointly organised by the African Union, UNDP and Government of Ghana.

He said a youth empowerment electronic platform had also been created to enable the Youth contribute to bills tabled in Parliament that were of their concern...”Their views would be collated, summarised and presented to the respective Parliamentary Sub-Committees.

“We believe that this will be a modest start to actually have inputs from the youth in the decision making process in the Legislature.”

In addition, he said government was working closely with development partners including United Nations Fund for Population Activities (UNFPA) to establish district youth fora that would enable the youth discuss matters of common interest in their respective districts.

The Youth Minister noted that the youth forum would create a platform at the district levels to harness the qualitative strength for accelerated national development for the management of diversity.

Dr Raymonde Agossou, African Union Commission Head of Youth Development Division, noted that AU's mission among other issues was to ensure regular multi-party elections, however, encouraging as this development were, elections that had been fraught with problems.

She said major electoral problems in Africa were mismanagement of diversity and electoral violence...stressing that; electoral violence and the ensuring political instability had had its devastating effects on the social fabric and economies as well as on the lives of the ordinary people.

Dr Agossou said African countries needed to work towards engaging the youth as part of their national development in order for them to make constructive contributions.

“Young people should be more and more involved in decision-making processes to ensure that they work towards solving problems that may arise from diversity; ethnic, cultural, gender, age and other issues and not resort to arms to resolve conflicts during elections,” she added.

The forum attracted over 70 participants from governmental and civil society organisations from 29 African Countries.