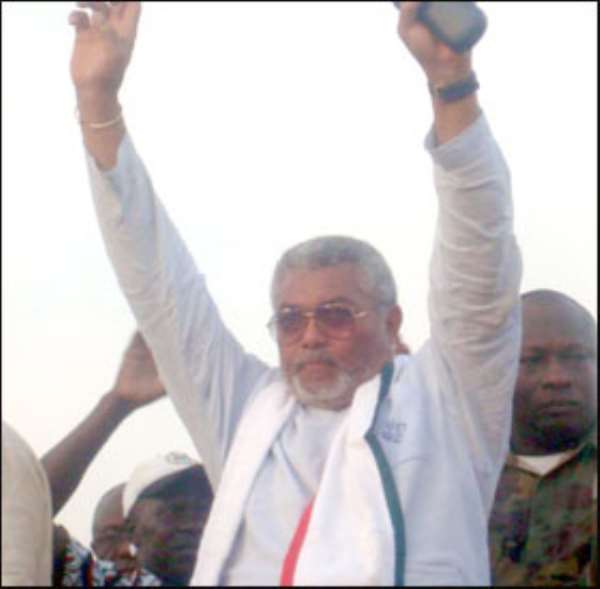 Exciting Radio Talk Show was organized last Wednesday, 4th May 2011 by TopAfric, a popular Radio station based in Hamburg, Germany. Samuel Marfo aka Bordey ,the radio presenter and a host of Africa Safari program, featured a panelist, Christopher Mensah, a renown political analyst and NDC Guru resident in Hamburg.

During the program, a lot of discerning listeners called the station to give their views and opinions as contribution to the program.

Bordey asked the Panelist to give brief historical events leading to the formation of AFRC and PNDC respectively.

Christopher explained that, years before the coming of Flt. Lt. Rawlings to the political scene of Ghana, the Nation was under the unconstitutional rule of Acheampong / Akuffo military regime (SMC1 / SMC 2 from 1972 to 1979)

The Armed Forces Revolutionary Council (AFRC) was the government of Ghana from June 4, 1979 to September 24, 1979. It came to power in a bloody coup that removed the Supreme Military Council, from power. The June 4 coup was preceded by an abortive attempt on May 15, 1979 when Flt. Lt. Jerry Rawlings and other ranks were arrested. Their trial only served to make them popular till they were eventually released on the morning of June 4 by young officers and noncommissioned officers inspired by Rawlings.

The regime started a 'House cleaning' exercise against corruption. Three former military leaders of Ghana, Lt. Gen. Afrifa, Gen. Acheampong and Lt. Gen. Akuffo were all executed together with five other senior officers deemed to have been corrupt by the special courts set up by the government.

TopAfric: Why therefore, the emergence of PNDC?

Christopher replied that, Despite the coup and the subsequent executions of former heads of military governments (Afrifa of the NLC; Acheampong and some of his associates of the NRC; and Akuffo and leading members of the SMC), the planned elections took place, and Ghana had returned to constitutional rule by the end of September 1979. Before power was granted to the elected government, however, the AFRC sent the unambiguous message that "people dealing with the public, in whatever capacity, are subject to popular supervision, must abide by fundamental notions of probity, and have an obligation to put the good of the community above personal objective."

TopAfric: quickly asked with a deep tone, what happened next!!! ?

Christopher remarked that, The PNP administration was short-lived. On December 31, 1981, Rawlings returned to office for the second time as head of the Provisional National Defense Council (PNDC). He insisted that the 31st December, 1981, Revolution was necessitated, among other factors, by the failure of the PNP administration to provide effective leadership and by the virtual collapse of the national economy and of state services. Upon assuming power, Rawlings immediately declared a “holy war” aimed at restructuring national political institutions, establishing genuine democracy based on Ghanaian ideals and traditions, and rehabilitating the economy.

Christopher explained that, it was the pressure from the western countries and the genuine choice from the Ghanaians who demanded the return of the nation to a multiparty system so that the nation could receive economic assistance from donor nations. This resulted the lifting on the ban of political parties. Consequently various political parties were formed including the NDC.

TopAfric: What have been the achievements of AFRC / PNDC under Rawlings?

Christopher replied that, at least during the era, the good people of Ghana were politically awakened, culture of silence was eliminated. The government was formed by the people and for the people. Therefore decision making process was in the hands of the ordinary. Institutions were established to check corruption and to promote accountability and probity being the basis of NDC.

TopAfric: Do you want to tell me that, Rawlings brought modern democracy to Ghana politics?

Christopher: Yes of course. Most African Head of states, who come to power by the mouth of the gun, choose to stay without wishing to handover power. But in the case of Rawlings, it has been the opposite.

TopAfric: Why has she shown the interest to contest for flagbearership of the ruling party; NDC?

It started in Tamale congress when few concern groups of persons incited her to contest. She thereafter, "tested waters" and had the intent. It's not against the constitution of NDC. It rather promotes the democracy of the party. Though opinion polls assessed that, the move is premature.

TopAfric: Many people are of the view that, criticism by Rawling against Prof. Mills government is a way of campaigning for Nana Konadu. What's your view?

Christopher: Listeners would bear with me that, JJ Rawlings is equally a citizen of Ghana; he was a former head of state with 19 years of governance experience. He's therefore entitled to his own opinion. His wife's intention to contest with President Mills has nothing to do with the criticism. Rather, it has been a designed democratic procedure of the party.

TopAfric: How do you see the future of NDC, come 2011 general election?

Christopher: The party has been in government for just a little over 2 years. Considering ongoing undertakings and cutting sods of developmental projects especially, building of school blocks, continuation of unfinished projects of former NPP government, payments of internal debts, inflation drops to single digit etc. I can say there's hope for the party if only the party is united after the presidential primaries.

TopAfric: How do you see the prospects of NDC Hamburg?

Christopher: The NDC-Hamburg is strong, stable and well organized. The affairs of the union have been in the hands of interim executives. Therefore, all necessary arrangements have been completed to organize internal general election to elect new officers or to maintain the executives. The election is scheduled to take place on Sunday, 8th May 2011 at Strassburger Street 3, in Hamburg. Time of the election will be 16.00 GMT.

TopAfric: Thank you, "Christopher" for being my Guest this afternoon.