Jesus Christ's Last Supper 'was on a Wednesday' 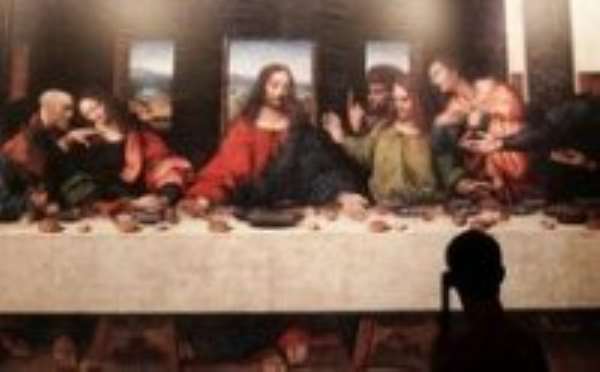 
Christians mark Jesus Christ's Last Supper on Maundy Thursday, but new research suggests it took place on the Wednesday before his crucifixion.

Colin Humphreys of Cambridge University says discrepancies in the Gospels of Matthew, Mark and Luke as compared with John arose because they used an older calendar than the official Jewish one.

He concluded the date was 1 April AD33.
This could also mean Jesus' arrest, interrogation and separate trials did not all take place on one night only.

Prof Humphreys believes his findings could present a case for finally fixing Easter Day to the first Sunday in April.

Puzzle.
In his new book, The Mystery Of The Last Supper, the metallurgist and materials scientist uses Biblical, historical and astronomical research to address the fundamental inconsistency about the event.

While Matthew, Mark and Luke say the Last Supper coincided with the start of the Jewish festival of Passover, John claims it took place before Passover.

"This has puzzled Biblical scholars for centuries. In fact, someone said it was 'the thorniest subject in the New Testament'," he told the BBC's Today programme.

"If you look at all the events the Gospels record - between the Last Supper and the Crucifixion - there is a large number. It is impossible to fit them in between a Thursday evening and Friday morning."

"But I found that two different calendars were involved. In fact, the four gospels agree perfectly," he added.

Prof Humphreys argues that Jewish people would never have mistaken the Passover meal for another meal because it is so important.

He suggests that Matthew, Mark and Luke used an old-fashioned Jewish calendar - adapted from Egyptian usage at the time of Moses - rather than the official lunar calendar which was in widespread use at the time.

"In John's Gospel, he is correct in saying the Last Supper was before the Passover meal.

But Jesus chose to hold his Last Supper as a Passover meal according to an earlier Jewish calendar," Prof Humphreys said.

The Last Supper was therefore on Wednesday, 1 April AD33, according to the standard Julian calendar used by historians, he concluded.

Election 2020: You'll have ‘fugitive’ president should Maham...
31 minutes ago