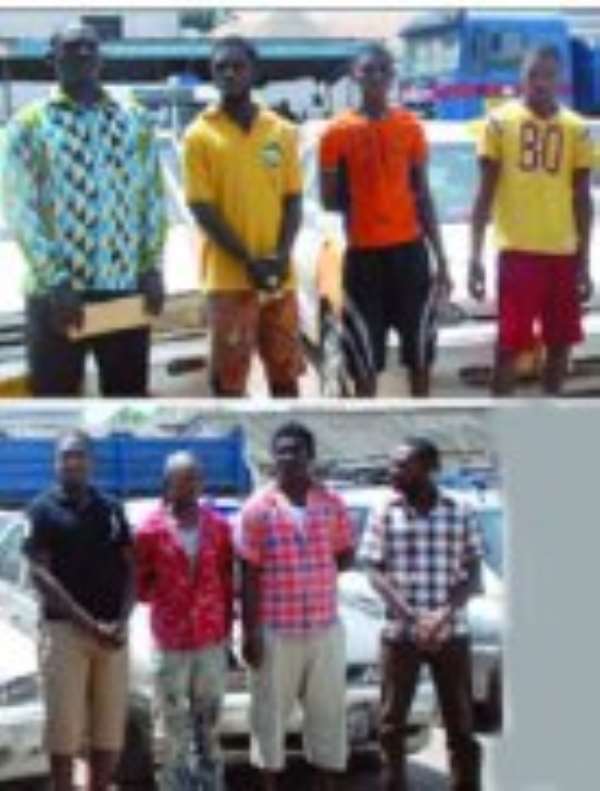 A massive police operation carried out in Accra, Kumasi, Akim Oda and Akwatia has led to the retrieval of 21 vehicles suspected to have been seized from their owners by a car snatching syndicate operating in various parts of the country.

The man believed to be the mastermind of the gang, Stephen Aklago, who claimed to be a National Security operative and known as Soldier and W/O, and seven of his accomplices are in police custody.

Briefing the press in Accra yesterday, the Accra Regional Police Commander, DCOP Rose Bio Atinga, described Aklago as a notorious car snatcher who had recruited a number of robbers to work for him.

She said following reports of car snatching between March and October, this year, the police started investigations to unravel the perpetrators behind the crimes.

She said the police had a tip-off that the leader of the gang lived at Akim Oda, where he received the stolen vehicles, changed their registration numbers and later sold them to individuals at Akim Oda, Akwatia, Buadua, Somanya and Kumasi, among other places.

DCOP Atinga said on October 28, 2010, the police embarked on an operation which was spearheaded by the Deputy Accra Regional Police Commander, ACOP Christian Tetteh Yohonu, at Akim Oda to track down the robbers and on arrival in the town the police team called Aklago on his cell phone that another snatched car had been brought from Accra for sale and had been parked at the Ntiamoah Hotel.

Aklago quickly went to the hotel in the company of Agyapong to receive the said vehicle and was arrested by the police and upon interrogation he admitted having received a number of vehicles from a gang of armed robbers in Accra.

The two suspects led the police to Akwatia and Buadua where they identified a Toyota Corolla with registration number GE 9802-10, Nissan Amira and Kia Rio vehicles as some of the vehicles they had sold to customers.

Again on September 30, 2010 Aklago led the police to Ashiaman where a Daewoo saloon car snatched by four of his accomplices was retrieved.

On October 4, 2010, Aklago led the police to Kumasi and another three of his accomplices, Emmanuel Ayew, Isaac Addai and Baba Iddrisu, were arrested from their hideout.

Further investigations into the case by the police revealed that Aklago recruited the other suspects to be snatching cars in Accra and Kumasi which he sells to bankers, nurses, teachers, miners and other businessmen at ridiculously low prices.

According to the police commander, because the prices of the vehicles were cheap there was always a rush to purchase them.

The commander has advised members of the public who had fallen victim to the activities of the syndicate to call at the regional headquarters and identify their vehicles.