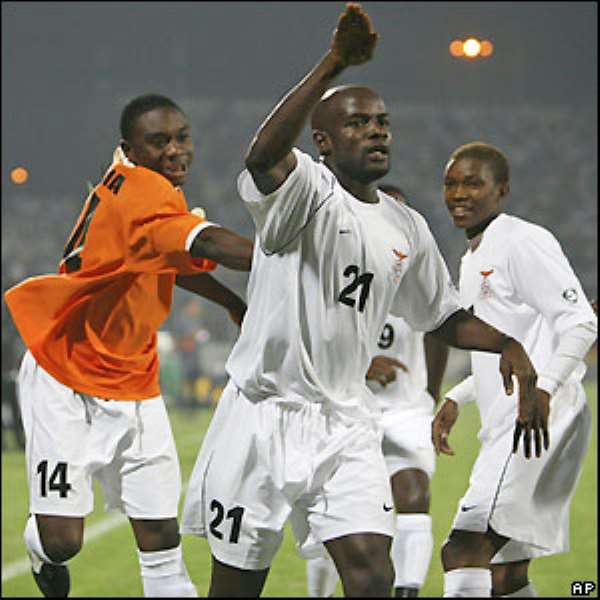 In a match slightly closer than the scoreline suggested, the Chipolopolo of Zambia still won by three clear goals against Sudan's Nile Crocodiles...

An early strike from James Chamanga was enough to see Zambia through to half time against Sudan, and a two goal onslaught just before the hour mark sealed a fine win for the Chipolopolo against a Sudanese side that may feel aggrieved at the scoreline.

It all seemed to be going Zambia's way when, just two minutes in, James Chamanga of Moroka Swallows opened the scoring with a tremendous effort from distance after being teed up by Joseph Mulenga.

The 'keeper was left motionless, and his side was clearly rattled as Chamanga once again strode forward just minutes later, setting up Felix Katongo for a strike that wasn't too far away.

But at the other end, Eldoud showed that Sudan were far from out of it with a thunderous drive that cracked off Mweene's far post.

This signalled the start of a period of strength for Sudan, but they were unable to make their pressure count leading up to the interval.

Hado came on as a substitute to try to press the advantage for the Sudanese, but his long-range efforts were found wanting as half time approached.

Zambia were riding their luck, and this continued after the break when Tambal was left unmarked in the box, but he fluffed his effort, leaving Mweene to heave a sigh of relief.

And in the 51st minute, that feeling of relaxation extended to the team at large as Mulenga made it 2-0.

Hachilensa made the goal by heading off the crossbar after a corner, with Maccabi Petach Tikva's Mulenga just waiting to tap it home. Sudan had been hit by a sucker punch, and Zambia's dominance was secure.

Just minutes later they well and truly wrapped it up with a third, struck by Felix Katongo of Angola's Primeiro de Agosto.

The young midfielder was able to once again take advantage of an opportunity to hit a rebound after El Moez parried Kabala's impressive long-range effort.

Chamanga then went one-on-one in an attempt to extend the lead, but Sudan really should have at least hit the back of the net on one occasion as the final quarteer-hour approached, first with a fine free-kick and then a Bashir effort that flew not far over.

Zambia tried to humiliate the Crocs with a fourth, but El Moez was the equal of Mulenga's top-corner header in what was perhaps the best chance of the late period.

That may have heartened the Sudanese, but just to show that nothing was to go their way, Babiker was denied what seemed to be a strong case for a penalty right at the death.

Zambia deserved their win, but a three-goal margin of victory flattered them slightly. Still, it was a fine, attacking showing from the Chipolopolo, who are almost unbelievably energetic in the attack. Sudan, for their part, can do better - now they must prove it.

Check out the match facts and line-ups here.