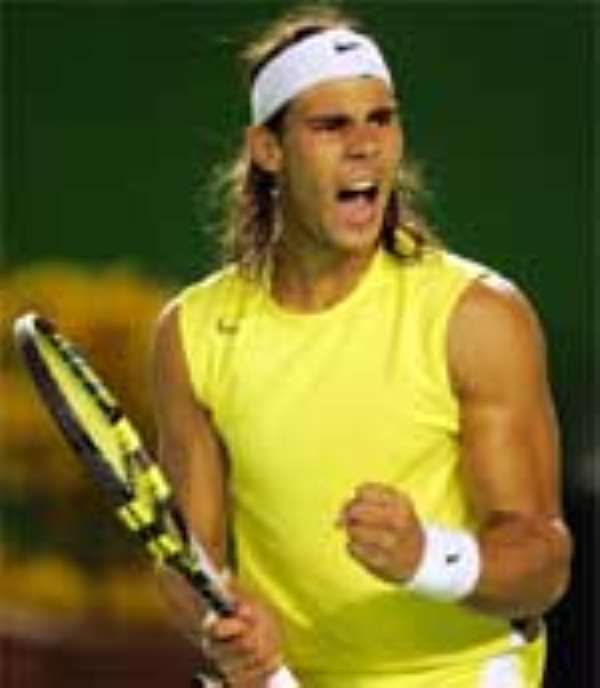 Andy Murray produced some courageous tennis in Melbourne but Rafael Nadal proved to be just too strong as the Spaniard won their Australian Open battle in a five-set thriller.

A titanic tussle swung back and forth as the two men slugged it out well into the early hours of the morning in Melbourne, with the second seed coming out on top 6-7 6-4 4-6 6-3 6-1 in the end.

The result could have been different for Murray had he converted more of the break points he created, leaving the British number one kicking himself.

Even in the final set Murray had five chances to break Nadal's serve thwarted by the tough Spaniard, who was a mightily relieved man when he finally booked his quarter-final date with Fernando Gonzalez after three hours and 52 minutes.

Murray started well and did not seem overawed by the occasion as he set about the world number two in the opening set.

The Scot had to save a set point at 5-6 to force a tie-break after it went with serve, but then two successful challenger helped Murray take the breaker 7-3 to claim a one-set lead.

The opening set had lasted 54 minutes and saw Murray cleverly mixing up the pace of his shots, the odd lob and drop-shot upsetting Nadal's rhythm.

The Spaniard had to come from 0-40 down to hold his first service game of the second set, but Murray did break in the fourth to go 3-1, and then held his own serve for a 4-1 lead.

Nadal got back into the game and, as Murray looked to have sustained a side injury, the powerful left-hander broke back.

A further break then saw Nadal go on to take five games in a row to win the set 6-4 and, with Murray apparently struggling, the French Open champion was well on top.

A break of serve in Nadal's favour in the third game of the third set to go 2-1 ahead was a big blow for an increasingly beleaguered Murray to absorb, but absorb it he did before showing the character to launch a comeback.

The 19-year-old broke back for 3-3 and managed to rediscover his top form to break Nadal again and go on to take the third set 6-4 for a 2-1 lead in sets.

Nadal survived five break points in the fourth game of the fourth set to hold his serve for 2-2, and Murray was made to pay as the Spaniard broke him twice to send the match into a deciding set.

Murray bounced back again and immediately carved out two break points in Nadal's opening service game, but again the Scot failed to capitalise on those chances, and Nadal converted his break point in the next for 2-0.

It was the same story in the next game as Murray missed another three break points and, try as he might, he could not force the break and Nadal held on with some ferocious defence at the baseline.

That proved to be the decisive move and Nadal marched on to claim another break en route to the final set, which he took 6-1 against a deflated Murray.

Nadal now faces a quarter-final tie against 10th seed Gonzalez, who will be delighted that Murray took the Spaniard all the way in a punishing contest, while the British number one is left to curse his missed opportunities.