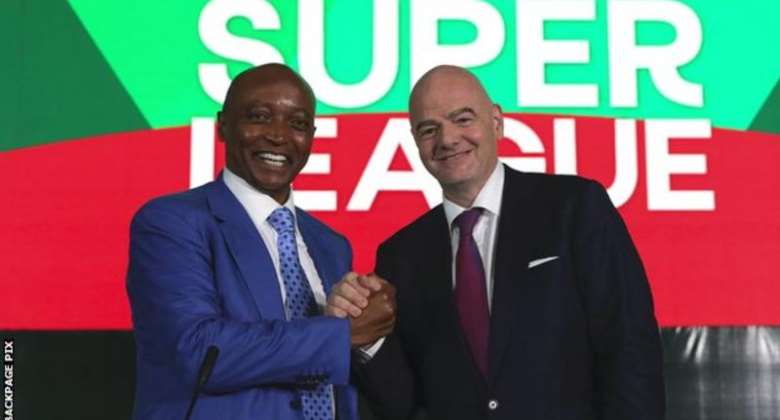 The creation of the Africa Super League will transform football on the continent forever, according to Confederation of African Football (Caf) president Patrice Motsepe.

"Part of the overall strategy is using the Africa Super League to significantly and fundamentally improve the quality of football on the continent," Motsepe told BBC Sport Africa.

The format will see 197 matches played from August to May, which Caf say will lead to a 'Super Bowl-like' final.

The main selling point of the Africa Super League, which Motsepe officially launched on Wednesday at the Caf general assembly in Tanzania, is the financial rewards it will provide to clubs, member associations and Caf itself.

Caf's 54 member associations will all get a $1m cash award per annum from the Super League kitty, with Caf hoping to earn about $50m which it can dedicate to youth and women's football.

"My objective is to get money for football infrastructure, for players, club owners, stakeholders. We are talking about anything between $250m to $300m every year," Motsepe explained.

"If you look at the numbers, we are talking about $2.5m for each of the 24 clubs to use, to help with transport and accommodation but also to buy players."

The chief executive of Tanzanian club Simba FC agreed with Motsepe's belief that the competition will have a wide-ranging impact.

"This is going to change the face of African football as we know it in terms of investment, exposure and marketing overall," Barbara Gonzalez told BBC Sport Africa.

"As one of the leading football clubs in the region, we're extremely excited about this."

The African Champions League, won by Wydad Casablanca last season, is set to continue but is likely to play second fiddle to the Africa Super League

The addition of the Super League will mean Africa will have three continental club competitions; the Africa Super League, the African Champions League and the Caf Confederation Cup.

Motsepe says that all three must co-exist, with the two already-established competitions also benefiting from the financial windfall expected from the Super League.

The Super League will have participants from 16 countries, with promotion and relegation planned via play-offs.

"I want to be in a situation where there's competition among all the leagues and I want the Champions League to even get more prize money, and to be competitive," the South African added.

Football's global governing body Fifa is working with Caf to see that the Africa Super League does indeed take off.

Fifa president Gianni Infantino was alongside Motsepe at the launch in Arusha, and the Swiss-Italian was quick to distance the new competition from the failed attempt to create a Super League by some of Europe's top clubs last year.

"Well, first of all, the Africa Super League is a completely different proposition than what was proposed in Europe, which was a kind of a breakaway thing outside of the structures," Infantino said.

"This is done within the structure within Caf, within Fifa, within the football pyramid structure."

Infantino explained Fifa's involvement in a club football project within one of its confederations as the two bodies working "together like a football team".

The 52-year-old said the partnership between the two organisations would "produce results and elevate African club football to the next level" and provide a similar boost to African national sides.

The competition has, however, come under criticism with the South African players' union saying the idea was ill-conceived, while a member attending the general assembly told BBC Sport Africa it could discriminate against smaller clubs.

"Part of our job is to engage and to consult with all stakeholders. And sometimes it's more important to listen to those who have got different views and also those who disagree with you," he told Sport Africa.

"I think some of them feel that we haven't spoken to them. We couldn't have spoken to everybody. It's impossible. We will engage with all of them."

Caf is set to announce the finer details of the Africa Super League in coming months, including on matters around promotion and relegation, and some attendees in Tanzania who spoke to the BBC would also like to see a financial model.

The continent's governing body is also yet to disclose how it will finance the league - with the latest audit report of accounts showing Caf needs a major cash injection to support this kind of elaborate venture in the next 12 months.

Meanwhile on Wednesday, Caf's member associations pledged to support Infantino in his bid to be re-elected as Fifa president next year, underlining the close ties between the two organisations as African football seeks a slice of the riches seen in the European club game.