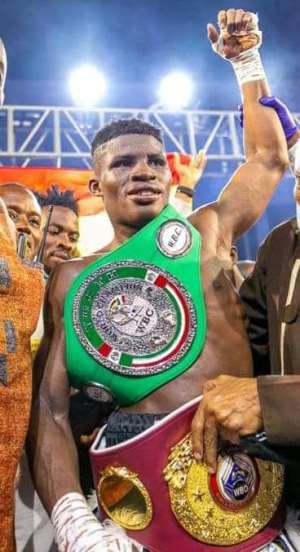 Mr Ntiamoah-Boakye says he is confident the fighter will win the award after a sterling year in the sports.

He wrote on his Facebook Page after the announcement of nominations last week;

“Proud to see your nomination as the SWAG Professional Boxer of the Year and I have the confidence you will win as your performance for this year has been spectacular, winning 4 championship titles this year West Africa Boxing Union (WABU) & Universal Boxing Organization (UBO) All Africa Featherweight titles as well as the World Boxing Organization (WBO) Youth World & World Boxing Council (WBC) Silver Youth World Titles. Go for it champ!,” Alex Ntiamoah-Boakye wrote.

Alfred Lamptey was nominated along with two compatriots Mohammed Aryeetey, who has no belt yet and WBO Africa Featherweight champion, John Abaja Laryea, both of whom have made immense gains in their respective careers this year.

The winner will be announced at the 46th SWAG awards ceremony to be held at the Accra International Conference Center on December 17, 2021.

Adwoa Safo impersonation: Findings from our preliminary inve...
12 minutes ago

Acting Speaker Joewise throws out minority’s motion to overt...
27 minutes ago