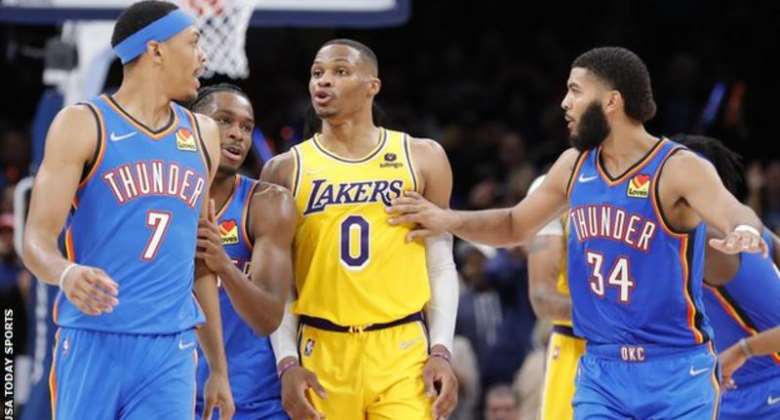 Russell Westbrook was ejected as the Los Angeles Lakers blew a 26-point lead to lose 123-115 against his former side the Oklahoma City Thunder.

The Lakers led 56-30 during the second quarter but the Thunder hit back to take a 97-95 lead at the third-quarter buzzer before staying clear.

Westbrook recorded his first triple-double for the Lakers since joining in August but also had 10 turnovers.

He was ejected late on for a second technical foul.

It was the 32-year-old guard's first appearance for the Lakers in Oklahoma City, where he spent the first 11 seasons of his NBA career.

LeBron James missed his second straight game because of an ankle injury.

Fellow star Anthony Davis scored 30 points but could not prevent the 2020 champions from losing a third game in their first five matches.

Shai Gilgeous-Alexander led the Thunder with 27 points to help them secure their first win of the season.

The Brooklyn Nets, another pre-season favourite for the title, suffered their third defeat of the season as they were beaten 106-93 by the Miami Heat.

Last year's beaten finalists the Phoenix Suns lost for the second game in a row as the Sacramento Kings secured a 110-107 win.

Set aside the purported rejection of 2022 budget - Majority ...
58 minutes ago

Xavier Sosu fights back, files for stay of execution against...
58 minutes ago