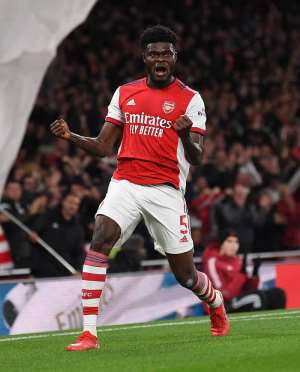 Thomas Partey scored his first Arsenal goal as the Gunners recorded a deserved victory over Aston Villa on Friday night at the Emirates.

The all-important win has moved Mikel Arteta's side into ninth place on the Premier League table.

The Ghanaian midfielder headed in Emile Smith Rowe’s corner after hitting the crossbar earlier to break the deadlock for the Gunners.

Arsenal were awarded a penalty after a video assistant referee review for a Matt Targett foul on Alexandre Lacazette just before the end of the second half.

Captain of the side, Pierre-Emerick Aubameyang scored from the rebound after his initial shot from the penalty kick was saved by former Arsenal keeper Emiliano Martinez.

Emile Smith Rowe scored Arsenal’s third 11 minutes into the second half winning the ball in his own half and beat the goalkeeper with the help of a deflection.

Aston Villa got a consolation when Jacob Ramsey curled his first Villa goal into the top corner from 20 yards.

Partey enjoyed the full 90 minutes of the game.

Immediately withdraw your directive to Goil; it's dangerous ...
21 minutes ago