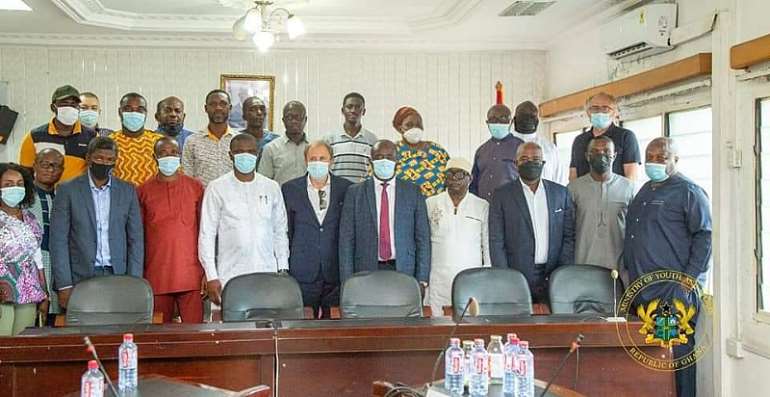 The Executive committee of the Ghana Football Association headed by the President, Mr Kurt Okraku has introduced the new coach of the senior national team, the Black Stars to the Minister and leader of the Ministry of youth and sports at a short ceremony at the Ministry’s conference room.

Addressing the committee members, the Minister congratulated the Serbian coach, Milovan Rajevac on his appointment as head coach of the Black Stars.

He noted that the coach will have a huge responsibility on his shoulders to rekindle the interest of Ghanaians in the National teams.

He, however, believes that the coach will live up to expectations and bring back the passion Ghanaians are noted for as far as football is concerned adding that every Ghanaian wants to see the progress of the sport.

“We have total confidence in you because we have seen your performance before and believe you will make a bigger impact on our national teams”.

He indicated that the coach would have to take the team to the World cup and perform better than his previous record of reaching the quarter-finals.

In his remarks, the President of the GFA noted that next year will be exactly 40 years since Ghana annexed the last AFCON title and was therefore upbeat about the chances of the team to win the next AFCON in 2022 under the new coach.

Mr Okraku said the mission of the committee was to introduce the new technical team members to the Minister and ask for his blessings.

On his part, the coach of the senior national team expressed his appreciation to the Minister for the support exhibited and noted that his team will try and do their best to achieve their goals.

“We know football is life in Ghana and when the national team performs well, everybody his happy”. He stated.

The team to assist the coach do his job include, coach Otto Addo who will combine this position as an assistant coach at Dortmund and Maxwell Konadu who is making a return after two years since he left the Black stars.