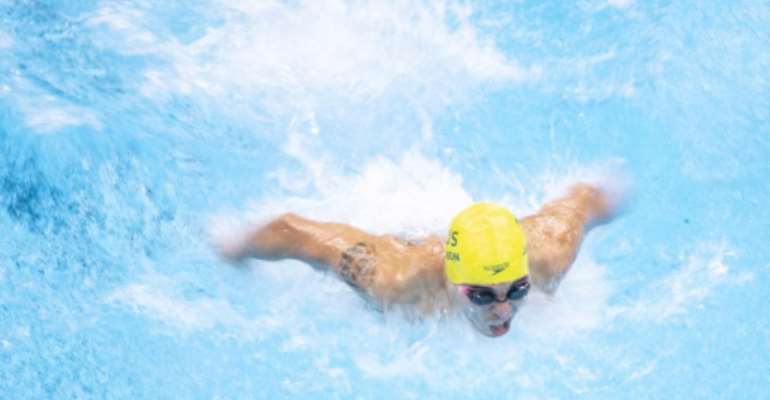 Paralympians are competing in the last day of swimming in Tokyo. By CHARLY TRIBALLEAU (AFP)

Paralympians battled for the last medals in swimming and cycling on Friday, while Turkey's women attempted to defend their goalball title as the Tokyo Games headed into their final days.

A whopping 55 gold medals were up for grabs on day 10 of the competition, including the men's and women's finals in goalball -- one of the few Paralympic sports without an Olympic equivalent.

Defending women's champions Turkey will face comeback queens the United States, who fought from behind to beat Brazil in Thursday's semi-final.

It was the third straight match that the Americans had trailed at half-time and gone on to win, and US player Amanda Dennis said her team "refuse to lose".

Calendar of events at the Tokyo Paralympic Games, from August 24 to September 5.. By John SAEKI (AFP)

"There's nothing stopping us," she said. "The word that we used this week was 'resilient'."

In the men's final, Brazil were set to take on China.

Eighteen-year-old Vink, who set his sights on becoming a Paralympian when he visited the 2012 London Games with his mother, was the tournament's youngest player.

"Winning gold in doubles and also bronze in singles, it's insane. To go home with two medals from my first Paralympics, it's insane."

"I want to tell all Peruvians to strive and work hard to achieve what they want -- dreams do come true," she said.

Espinoza Carranza's victory means 83 countries have won at least one medal at the Tokyo Games, equalling the record from Rio 2016.

International Paralympic Committee spokesman Craig Spence said the "strength in depth is certainly increasing" in para sports, but admitted there was "still work to do".

"If you look at the medals table, there's a north-south divide where you've got all the rich nations towards the top and those smaller nations who are less developed at the bottom, and that comes down to assistive technology," he said.

"We want to work with governments around the world to make assistive technologies more affordable for all."

Elzayat had to be taken to hospital after being injured in his semi-final, and although he returned for the final, he was unable to compete.

In swimming, there were 16 finals set for the last day of competition, with US Paralympic legend Jessica Long looking to add to her bulging collection of 28 medals.

Long will compete in the women's S8 100m butterfly, a day after winning 4x100 medley relay gold with her US team-mates.

"There was this really powerful look between each of us," Long said after the relay.

"We know what we're capable of, and we proved it out in the pool today."

There were 17 athletics finals scheduled for Friday, with Japan's Toru Suzuki hoping to win gold for the host nation in the men's T64 high jump.

Anti-gay bill : Tell foreign missions if they provoke us we'...
3 hours ago