Erasmus expects Lions to be fast, expansive against Springboks 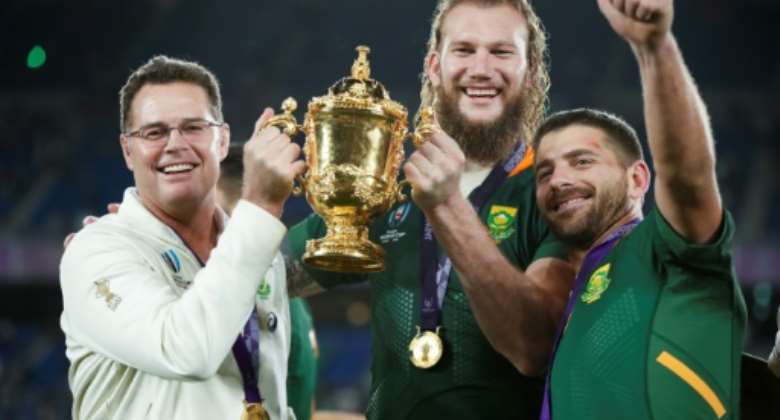 Rassie Erasmus, coach of 2019 Rugby World Cup champions South Africa, expects the touring British and Irish Lions to play a fast, open game in the republic during July and August.

Speaking during a virtual media briefing on Friday, he predicted that the visitors would avoid becoming involved in an "arm-wrestle" with the star-stacked Springbok pack.

"Scotland have eight players in the squad and five are backs, and their coach, Gregor Townsend, is the Lions' attack coach. That says a lot," said Erasmus.

"The Lions also have a fast, quick pack. The props and loose forwards are mobile guys. It looks like (head coach) Warren Gatland is working on an expansive style."

"Most of those guys have worked with Warren before, which is really smart. I think the toughest thing for them is to get the four countries to play the same way and be aligned."

After winning the World Cup, Erasmus returned to his original post of South African director of rugby with his former assistant, Jacques Nienaber, elevated to head coach of the Springboks.

A 45-man squad for the three-Test series will be named on June 5 and be based in central city Bloemfontein ahead of the series.

South Africa, who have not played since defeating England in the World Cup final in Japan in November 2019 because of the coronavirus pandemic, will warm up with Tests against Georgia on July 2 and 9.

"There are definitely a few young guns who are in the mix along with the older or more familiar guys," said Erasmus.

"Wonderful talent is available to us, and many have been playing top-level rugby overseas. So that has been encouraging.

"We have been quite restricted in South Africa in terms of international rugby and could not take part in the Rugby Championship last year."

While he did not want to discuss the likely composition of the squad, Erasmus did drop a few hints, including praising Leicester Tigers' loose forward Jasper Wiese.

"Jasper has been playing very well for Leicester and we have seen guys like Rynhardt Elstadt and Cheslin Kolbe winning the European Champions Cup with Toulouse.

"We have lots of South Africans players doing well in the (English) Premiership while a guy like Damian de Allende is in very good form in the Pro14 Rainbow Cup.

"So this has been really beneficial for us along with the local boys who have been getting a lot of rugby under their belt lately."

The Lions will play Japan in Edinburgh on June 26 before launching their eight-match tour against the Golden Lions in Johannesburg on July 3.

They then tackle the Sharks, Bulls, South Africa A and Stormers before the first Test in Cape Town on July 24.

The 95,000-capacity FNB Stadium in Soweto will stage the other two Tests on July 31 and August 7 although all the tour matches are being played behind closed doors because of Covid-19.