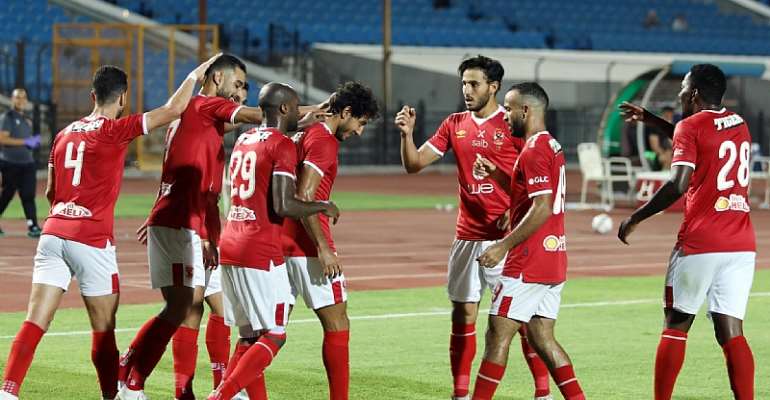 Al Ahly of Egypt booked a place in the African Champions League semi-finals on Saturday with a 1-1 draw at Mamelodi Sundowns, as South Africa's Kazier Chiefs, Tunisia's Esperance and Wydad Casablanca also progressed.

Al Ahly's 3-1 aggregate quarter-final win over Mamelodi Sundowns made it a triumphant return to South Africa for Ahly coach Pitso Mosimane against his former club.

Yasser Ibrahim opened the scoring for Ahly in the 11th minute to extend their 2-0 advantage from the first leg.

Mosa Lebusa made it 1-1 on the half-hour mark but Sundowns failed to add to the tally as the reigning champions advanced.

Mosimane's Ahly will continue their quest for a 10th Champions League crown against Esperance in the semi-finals.

The Tunisians will host Ahly in a repeat of the 2018 final on 18 or 19 June with the return match the following weekend.

Esperance, who lost the first leg of their quarter-final 2-0 away to Algeria's Chabab Belouizdad, produced a memorable fightback on Saturday to win on penalties.

Abdelraouf Benguit pulled one goal back for the Tunisians in the 68th minute.

A dramatic equaliser from Mohamed Ben Romdhane three minutes from time took the tie to spot-kicks with Esperance winning the shootout 3-2.

In Tanzania, South Africa's Kaizer Chiefs survived a late fightback by Simba to progress to the semi-finals of Africa's elite club competition for the first time in their history.

Simba began the quarter-final 4-0 down from the first leg but a brace from Simba's John Bocca in front of their home fans gave the Tanzanians hope.

When Cletus Chama scored in the 86th minute to make it 3-4 to Simba, Kaizer Chiefs were hoping history was not about to repeat itself.

42 years ago, Simba staged the greatest Champions League comeback, winning 5-0 at Mufulira Wanderers of Zambia after losing 4-0 at home.

The current team were on the verge of another miracle but the South Africans held on to earn a semi-final place against Wydad Casablanca who will host the first leg in Morocco next month.

A goal from Walid el Karti was enough to give Wydad a 1-0 win over Algeria's MC Alger and progress 2-1 overall.