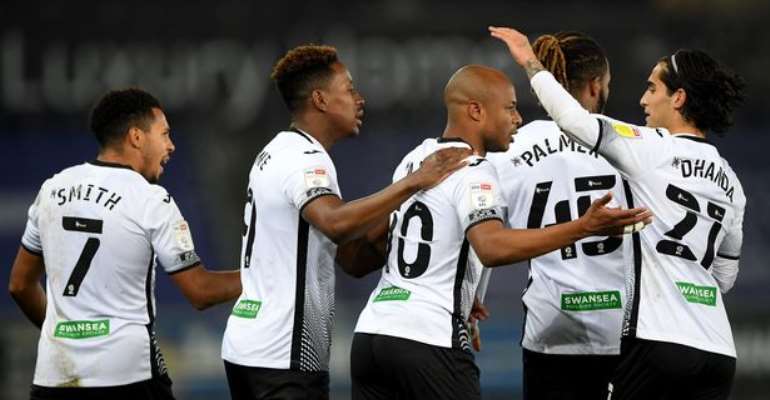 Swansea City forward, Andre Ayew is eyeing a starting ahead of their game against Nottingham Forest on Sunday.

The Swans will be hosted at the City Ground Stadium at lunchtime in the English Skybet Championship.

After coming as a substitute to score in their 1-1 game against Sheffield Wednesday at the Liberty Stadium due to an injury he suffered on international, the 30-year-old is hoping to return to the squad for the game.

"I haven't done too much in the past 10 days. We knew I wasn't 100 per cent ready to start," Ayew said after the last game, as reported by his club's official website.

“If he could have left me out, the gaffer would have done that to prepare me for Sunday, but that's football; you need to be ready.

“As the game was going on, I was preparing to come on. It was important to warm up well and not feel any pain in my hamstring, especially as it's an injury I've had for the first time in my career.

“I had to take care of it, the physio's been doing a great job on me - hours of work trying to get me back as soon as possible.

“I was a bit doubtful for Wednesday night but after this, I'm quite happy with how it felt.

“It wasn't the best, but it'll be better over the next few days and hopefully I'll be 100 percent on Sunday."

The Ghana captain is enjoying a purple patch of form, having registered six goals in 12 Championship outings for the club so far this term.

"I’ve always felt that [he's worth his wages]," said Cooper, according to Dai Sport, responding when asked whether he felt the 30-year-old, who returned from a short injury lay-off with a crucial equaliser in midweek's 1-1 draw with Sheffield Wednesday, is proving his worth.

“I’ve said it many times, he’s an outstanding player and professional and a good person, too.

"He’s motivated to do well, but he had a setback getting injured on international duty.

"The Championship is full of really good players and Andre is up there with the best of them. He has been fantastic for us.”

Ayew sustained a hamstring injury while on international duty with Ghana earlier this month, forcing him out of the matchday 12 fixture against Rotherham United.