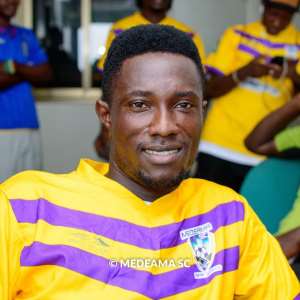 Medeama SC captain, Joseph Tetteh Zutah has insisted that his side has the best midfielders ahead of the 2020/21 Ghana Premier League.

The Yellow and Mauves have the likes of experienced midfielder, Kwasi Donsu, Eric Kwakwa, Richard Boadu, Awudu Tahiru, Agyenim Boateng and the captain.

Justice Blay’s decision to stay at the club will obviously Medeama in the upcoming season.

“Undoubtedly we have the best midfield in Ghana today.

“Justice Blays’ inclusion this season is a boost. Even without him, our midfield was very solid.

“I do not think any club can compete with us this season in the midfield,” Zutah told Kumasi FM.

”It is very good for the team because there will be an equal replacement when one is absent though it will give the coach a selection headache.

”It is not only in the midfield but we have a good defense too,” he added.

Medeama will begin their season in a home game against Great Olympics at Akoon Park.

Bagbin fly to Dubai for medical review after budget rejectio...
23 minutes ago