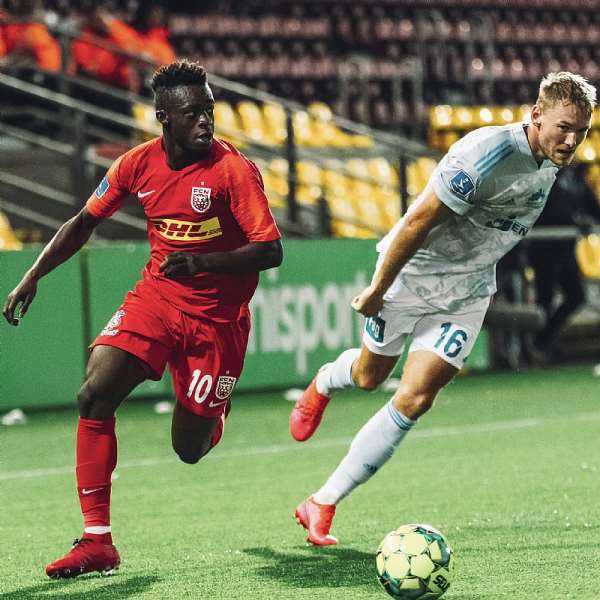 Ghanaian teenager, Kamal-Deen Sulemana hit a brace on Monday evening to help his FC Nordsjaelland outfit to post a 4-1 win over Lyngby BK in the Danish Superliga.

The talented forward has been given a bigger role at his club following the transfer of compatriot Mohammed Kudus to Ajax Amsterdam at the end of the 2019/2020 football season.

In a Matchday 3 fixture of the recently started Danish Superliga season, Kamal-Deen Sulemana was handed a starting role in the attack of FC Nordsjaelland when the team hosted Lyngby BK at the Right to Dream Park.

The visitors proved a tough nut to crack in the first half as they went into the break with a 1-goal lead courtesy a strike from Kasper Joergensen that stunned the home side.

After recess, Kamal-Deen Sulemana dazzled and played a key role in the move that resulted in Ulrik Yttergaard Jenssen’s equalizer on the 50th minute to restore parity for FC Nordsjaelland.

Now with momentum, the Ghanaian forward displayed fine form in front of goal 4 minutes later and found the back of the net to give his team the lead for the first time in the match.

With Magnus Kofod Andersen adding a 3rd goal for the home team on the 76th minute, Kamal-Deen Sulemana will score again on the 80th minute to complete his brace while wrapping up a 4-1 resounding win for FC Nordsjaelland.

In addition to his 2 goals, the 18-year old won 70% of his duels on the matchday and completed 11 out of 15 attempted dribbles.