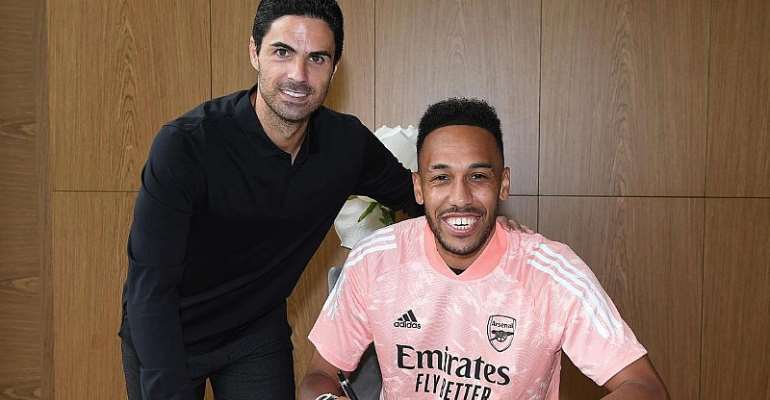 Pierre-Emerick Aubameyang has finally put an end to speculation about his future by signing a new Arsenal contract.

The Gabon forward, 31, was linked with an exit from the Emirates for months after entering the final year of his deal.

Some of the biggest clubs in Europe registered an interest in Aubameyang, including LaLiga giants Barcelona.

However, manager Mikel Arteta and the Gunners board have convinced their star striker to sign – to the delight of supporters.

The signing of the contract was much-anticipated, with reports first saying a deal was agreed last week.

Arsenal and Aubameyang himself teased the announcement for many days, before finally confirming the contract news on Tuesday afternoon in a live stream from the Emirates.

A statement was later added to Arsenal’s official website reading: “Pierre-Emerick Aubameyang has signed a new three-year contract with us!

“Having put pen to paper on his new deal, our 31-year-old captain wanted to break the news on Arsenal.com and on social media by telling fans LIVE that he was staying, with the ambition to lift more trophies and leave a long-term legacy.”

Aubameyang said upon signing his new contract: “Signing for this special club was never in doubt.

“It’s thanks to our fans, my team-mates, my family and everybody at this club that I feel like I belong here. I believe in Arsenal. We can achieve big things together. We have something exciting here and I believe the best is to come for Arsenal.”

Manager Arteta added: “It was important for Pierre-Emerick to stay with us. He’s a superb player with an incredible mentality.

“Being the player to have taken the least amount of time to reach 50 goals with this club tells you everything you need to know about him and his way of working.

“He’s an important leader for the team and a big part of what we’re building. He wants to be up there with the best players in the world and leave his mark. He can achieve that here.”

Arsenal goal hero Ian Wright joined Aubameyang on the live-streamed announcement to thank him for sticking with the Gunners at such an important time for the club.

“I love you, man,” gushed Wrighty. “Can I just say, because I’m sure there’s loads of people requesting you, can I just say you signing for us in the time we need you most when we’ve seen legends leave us when we need them.

“You are legendary status for life. I love you, captain. Everyone’s happy man.

“I’m going to try and come and see you later. The fans love you.”

Aubameyang moved to Arsenal in 2018 from Borussia Dortmund and has continued to score goals in abundance, becoming an iconic figure at the north London club.

Saturday’s strike against Premier League new boys Fulham – securing a 3-0 win in the opening game of the 2020/21 Premier League season – was his 55th in the top flight in just 85 games.

The new deal is understood to make Aubameyang the highest-paid player at the Emirates, surpassing Mesut Ozil’s £350,000-a-week wages.

It will bank him close to £60million over the next three years.

Aubameyang scored the winner for Arsenal against Chelsea in the FA Cup final at Wembley in August and was also the match-winner in the Community Shield later that month.

Speaking on the Weekend Breakfast after the victory at Craven Cottage, former Aston Villa and England striker Gabriel Agbonlahor insisted keeping hold of Aubameyang was the most vital thing Arteta could do at the club.

“Adding Willian – he was a star [against Fulham] with three assists – with a couple more signings in the right positions and I think Arsenal can definitely break into the top four.”