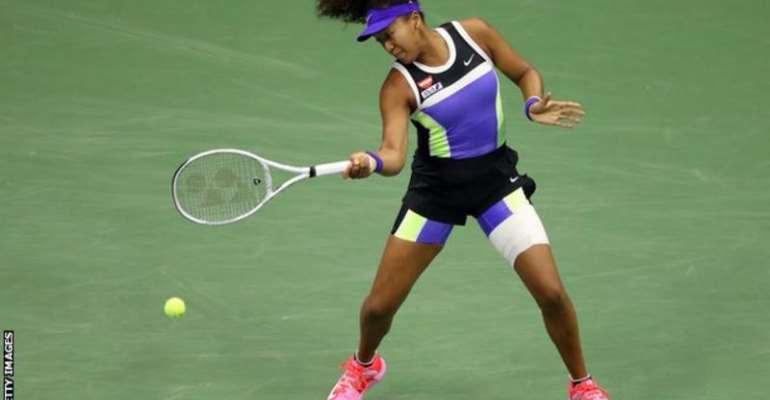 American Rogers, 27, had upset sixth seed Petra Kvitova in the fourth round but could not match an almost flawless performance from Japan's 2018 champion.

Although Osaka was broken once in the first set, victory never looked in doubt as she cruised to a 6-3 6-4 win.

The 22-year-old will face American 28th seed Jennifer Brady in the semi-finals.

Brady, 25, reached the last four at a Grand Slam for the first time by beating Kazakh Yulia Putintseva 6-3 6-2.

"I feel pretty good," said Osaka, who wore a face mask with George Floyd's name on it in her on-court interview as she continues to raise awareness of racial injustice.

"The scoreline might not suggest it but I've had a couple of really hard matches that made me really grateful to be in this position."

Former world number one Osaka had lost to Rogers in straight sets in their past three meetings, but the last of these came in 2017 and she looked in imperious form from the outset on Arthur Ashe Stadium.

The 2019 Australian Open champion dropped just two points in her first three service games and her relentlessly high level eventually became too much for Rogers.

The American saved one breakpoint in the sixth game but drove a backhand long to lose a second.

A double fault from Osaka opened the door for Rogers in the next game and the lower-ranked player took the opportunity to break back with a superb forehand return.

It was only the fourth time Osaka has been broken in this year's tournament and she looked undisturbed as she whipped a forehand cross-court to immediately repay the favour.

Another booming forehand from the world number nine forced Rogers' backhand wide to wrap up the first set in 38 minutes.

Rogers was undeterred and continued to fight early in the second set but a lapse in concentration gave Osaka breakpoint and the former champion took the lead as the American's backhand sailed wide.

The two-time Grand Slam winner continued to make seemingly unreachable shots, sprinting forwards to pick up Rogers' drop-shot and claim her second hold to love of the set.

A third hold to love sealed Osaka's place in the final four, as Rogers brought her first US Open quarter-final to an end with a forehand into the net.

"I just felt like she had the upper hand because I've never beaten her and those memories are stuck in my head," Osaka added.

"I consider this a little bit of a revenge."

The women's draw has been wide open after high-profile withdrawals before the tournament because of the coronavirus pandemic as well as an early exit for top seed Karolina Pliskova.

It has paved the way for lower-ranked players such as Brady to make their mark on the biggest stage at Flushing Meadows, where the event is being held behind closed doors.

"I came out with nerves, she [Putintseva] did too. I just tried to pretend it was a first-round match," said Brady, who won last month's Top Seed Open for her first WTA title.

"I was happy with how I started and was able to build on the momentum."