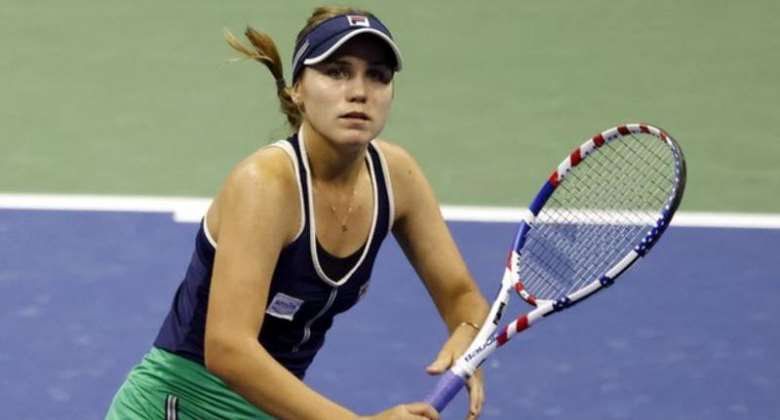 Kenin had beaten Mertens in their two meetings in 2019

Australian Open champion and second seed Sofia Kenin says she was in tears after losing in the last 16 of the US Open.

The 21-year-old American, the highest seed left in the women's singles, lost 6-3 6-3 to Belgian Elise Mertens.

"I cried after already. Just trying to hold it back right now. I'm not happy about that match," she said afterwards.

"Tonight is not going to be such a great night because I'm pretty bummed about what happened. I hate losing."

The Moscow-born player, who had not dropped a set in her first three rounds, struggled with her serve against Mertens.

She won only 56% of first-serve points compared to 75% for Mertens, and also served up three double faults.

"I did better at the US Open than I usually do, fourth round, that's better," added Kenin, who had lost in the third round for the last three years.

"This is not funny, but somehow you have to joke around. I'm going to take the positives from here, try to forget this match.

"I obviously did not bring my game that I wanted to bring against a player like her. You have to have your game, not make that many mistakes like I did."

Kenin said she would now dust herself down and focus on the clay court season.

"I'm heading over to Rome. Possibly Strasbourg, I'm not sure, but for sure Paris," she added. "Hopefully I can do well there."