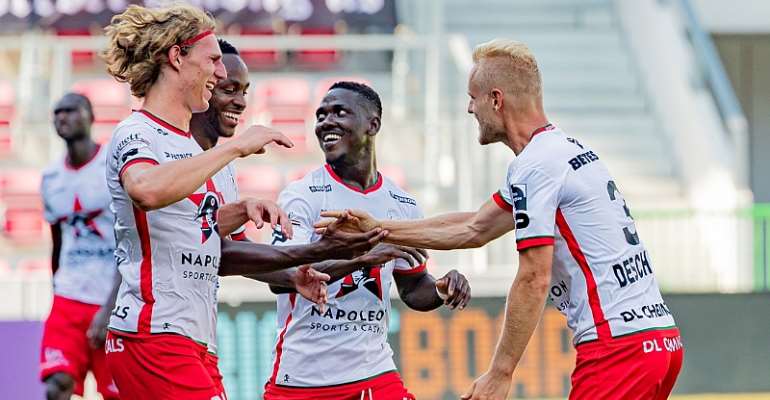 The defender picked up an injury on the opening weekend of the recently started season before missing the second game last weekend.

In a Matchday 3 fixture staged at the Regenboogstadion today, the fit-again Daniel Opare earned a starting role to help his team fight for the maximum 3 points.

A good first-half performance from Zulte Waregem deservedly saw the side going into the break with a 1-0 lead courtesy a strike from Jelle Vossen after he was assisted by Gianni Bruno on the 20th minute.

Less than 5 minutes after the break, Gianni Bruno registered his name on the scoresheet to double the lead for the home team before Omar Govea found the back of the net on the 63rd minute to make it 3 goals to nothing.

Later on, Daan Heymans scored to reduce the deficit for Waasland-Beveren. Unfortunately, it only served as a consolation goal with Gianni Bruno scoring his second in added time to ensure Zulte Waregem cruised to a 4-1 win.

Daniel Opare enjoyed 77 minutes of the game before making way for Cameron Humphreys. The full-back looked in good shape and should be in action for his team next weekend when they make the trip to Royal Excel Mouscron.