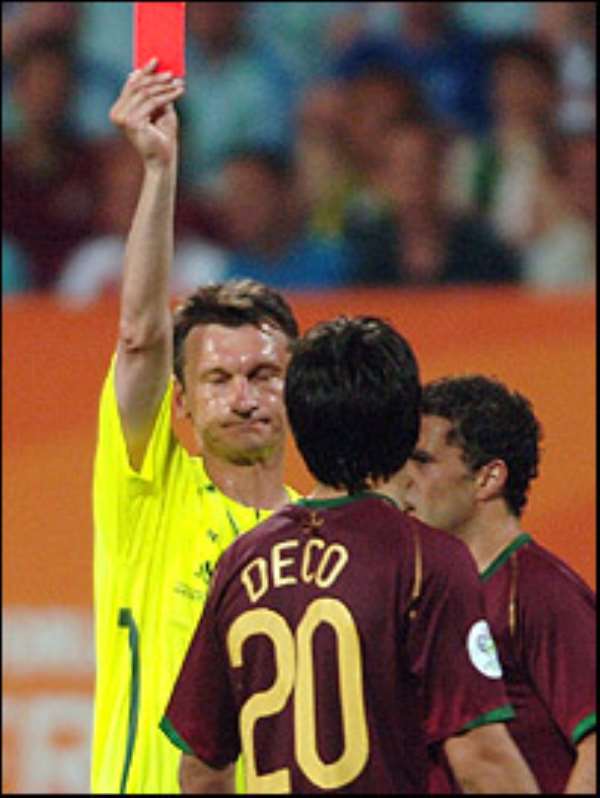 Portugal booked their place in the last eight of the World Cup and a meeting with England on Saturday after beating Holland in a stormy encounter.
Both teams finished the game with nine men after a game which equalled the World Cup record for bookings - 16 - and broke the record for red cards.

Deco and Costinha were dismissed for Portugal, while Khalid Boulahrouz and Gio van Bronkhorst saw red for Holland.

Maniche scored the only goal, firing into the top corner after 23 minutes.

Luiz Felipe Scolari's side will now play England on Saturday 1 July at 1600 BST in Gelsenkirchen, live on BBC One, Radio Five Live and on the BBC Sport website.

Russian referee Valentin Ivanov set the tone for his performance by booking players from the start for late tackles that he could have given free-kicks for.

Costinha was the first to go, his first offence a sliding foul on Philip Cocu and his second a blatant handball, leaving Ivanov with little choice.

Portugal should have been reduced to nine when Figo was only booked for headbutting Van Bommel, who took his time before falling to the floor.

Soon after Figo was at it again. This time it was his turn to fake serious injury as he tangled with Boulahrouz, who was handed a second booking and dismissed.

There was more action in the referee's notebook than on the pitch.

Deco was booked for a flying foul on Johnny Heitinga and he was off soon after, shown a second yellow for refusing to hand the ball back to Holland as Ivanov continued to throw cards around like confetti.

The bookings prevented a young and inexperienced Holland side from gaining any sort of momentum as they chased the game.

Their miserable evening was compounded in the fourth minute of stoppage time when Van Bronckhorst was shown a second yellow for a minor foul.

Yet they had started so brightly, keen to test Ricardo from range as Mark van Bommel and Robin van Persie went close in the early stages.

From being in control the Dutch seemed to switch off - and their lapse in concentration invited pressure that cost them a goal.

Deco found space down the right and his cross was laid off by Pauleta to Maniche, who shimmied to create room and hammered the ball into the top corner from 16 yards.

Maniche blasted over as Portugal poured forward but their plans took a turn for the worse when Cristiano Ronaldo limped off with an injured thigh after half an hour.

The Dutch seemed to gain encouragement from this and Van Persie twisted and turned sublimely in the Portugal box before toe-poking wide from an acute angle.

Costinha's dismissal forced Scolari into a change at the break but it was a surprising decision to take off Pauleta and play Luis Figo as the lone striker in a 4-4-1 formation.

They were nearly pegged back immediately but Cocu fluffed his lines, slamming against the underside of the bar from eight yards after Nuno Valente's poor control.

Ricardo tipped a Van Bommel drive round the post before the keeper did well to parry a Wesley Sneijder shot from distance, but Holland never seriously looked like forcing extra-time.

It was Marco van Basten's first competitive defeat as Dutch coach and leaves Holland still waiting for their first win against Portugal since 1991.

As for Scolari, the Brazilian can look forward to yet another finals meeting with Sven-Goran Eriksson - his teams put England out of the 2002 World Cup and Euro 2004.

My wife was pregnant – Husband of missing but found Takoradi...
24 minutes ago

I'm not bothered about a likely coup, I worry of possible up...
37 minutes ago