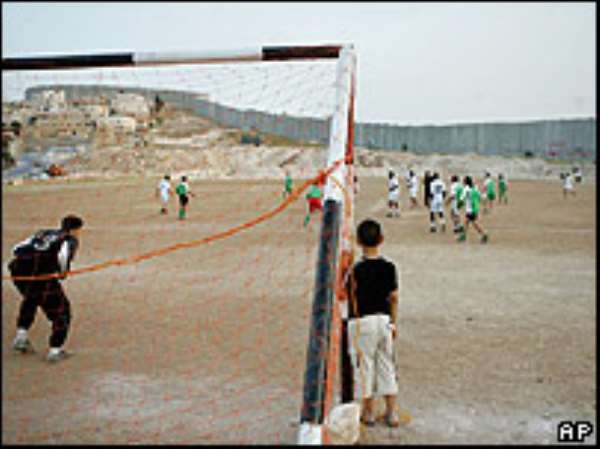 It is about the only issue Israelis and Palestinians can agree upon. The TV subscription rates to watch the football World Cup are too high.

In a region where disagreement is the norm between Israelis and Palestinians, the beautiful game has led to a degree of unity among the fans.

Furious Israeli football fans are staging a consumer rebellion that has prompted a parliamentary probe and already led to a reduction in prices.

Palestinians living in the West Bank and Gaza are fervently trying to circumvent charges of up to $600 (£325) and watch matches on pirate TV channels which are pledging to broadcast the games free of charge.

"Football is very far from politics," says Khaldoun al-Nadi, manager of the Olmonds Bar in the West Bank city of Ramallah, explaining the common ground between the fans. "For many people it's more important than politics."

While neither Israel nor Palestine (as the team is designated, even if there is no state of that name) qualified for the World Cup in Germany, interest in the tournament is intense in this part of the world.

Some fans have donned Brazilian football tops - which seems to be the country with most support from both sides - shops are stocked with memorabilia, and bars in Israel are gearing up for a busy month of business.

Making light of the sporting unity, the Israeli daily newspaper Haaretz published a cartoon showing Israelis clambering over the West Bank security barrier to join Palestinian farmers to watch the tournament for free.

"We're all one family," says an Israeli in the sketch.

Among some Israeli politicians the issue of TV subscription fees has become something of a cause celebre.

There have been calls for the Israeli treasury to subsidise fans wishing to tune in.

One politician, getting carried away with the football fever, said the issue could bring down the government.

Originally, Israeli fans were going to have to fork out more than $200 to watch the tournament but that has now fallen to around about $70.

But this has not been enough to placate the angry fans.

"In football they make a lot of money and it's the most popular sport in the world," says Shay Nir, 29, an engineer in Jerusalem. "I'm not going to pay."

But Israel and the Palestinian territories are not the only places where supporters are being asked to fork out to watch the World Cup.

Fans in Poland and Italy will need to pay to access some of the games. In the West Bank and Gaza territories viewers are being asked to cough up $600 to a Saudi-based satellite channel - too much for most Palestinians.

"It's a lot of money, especially when the situation is so bad," says carpenter Fadi Said, 25, referring to the economic sanctions that have been imposed on the Palestinians following Hamas' election victory in January.

While the football World Cup's official slogan may be "a time to make friends", most Israelis and Palestinians football fans agree that their newfound agreement will not last long - probably until the final whistle of the World Cup.

Missing pregnant woman sparks fear and panic in Takoradi as ...
43 minutes ago

NPP urge party members to be ready to accept Akufo-Addo’s ne...
54 minutes ago