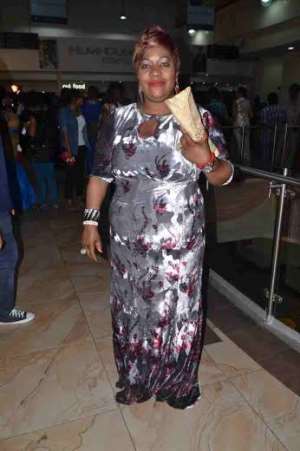 Playful and Jovial Nollywood star, Chief (Mrs) Ngozi Nwaneto- Amarikwa , popularly known as the mischievous 'Carol' of the first Nigerian English movie 'Living in bondage' was among the many Nollywood forerunners who were present at the movie premiere of 'Mama Africa' that took place recently in Lagos.

The Nigerian actress dazzled on the red carpet of the event in a floor length floral print velvet dress, styled with a golden purse with minimal makeup and red pout. She also flaunted a bead on her wrist which she said is significance to her title as the 'onu na ekwuru oha' of Umueze –Amaimo and the 'Ada Ikeduru' of Imo State.

In a chat with Nollywoodgists.com the outspoken Nollywood thespian who still sounds very young at heart, described her fashion style saying, “I don't like to expose my cleavages, I am a 'Mama', irrespective of that , from the onset I never liked it and even the bible condemns it totally.

“I wouldn't want anyone to condemn me; nevertheless, I make my clothes based on how it suits me and my style”.

Ngozi, who is blessed with a 14years old child and a lovely husband, has shot for herself a new movie titled 'Power of the cross' which is based on the catholic faith which centres on both children and women.

When asked if it has been premiered yet, she replied “Not yet, and the reason is because it is a catholic movie, and I need to take permission first from the bishop”.

E-levy has been approved, we just need backing legislation –...
46 minutes ago