'It just got worse': Domestic violence surges under S.Africa lockdown 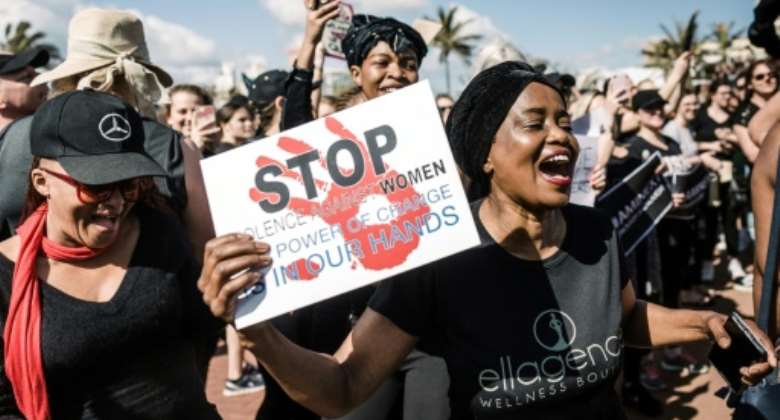 Protests last year spurred South Africa to wake up to the domestic violence -- a crisis that is being worsened by coronavirus lockdown. By Rajesh JANTILAL (AFP)

South African hairdresser Sandy feared for her life when a five-week coronavirus lockdown trapped her indoors with her abusive husband.

"He has threatened to break my business and destroy me," said the 42-year-old, who did not wish to use her real name.

"It started the first day of lockdown and it just got worse."

Sandy's was far from an isolated case.

More than 120,000 victims rang the national helpline for abused women and children in the first three weeks after the lockdown started on March 27 -- double the usual volume of calls.

At least 4,996 coronavirus cases have been recorded so far -- the highest in Africa -- including 93 deaths.

South Africa had been grappling with the scourge of violence against women long before the coronavirus lockdown was imposed.

A woman is killed every three hours in South Africa, according to police statistics -- a rate five times the world average. Half are murdered by men with whom they had a close relationship.

Official statistics suggest that more than 110 rapes are reported to the police per day.

Stay-at-home measures have only made things worse for women stuck in abusive relationships.

"If they are abusers naturally, the lockdown is a great opportunity for them," said Kathy Cronje, who heads a shelter for domestic violence victims named Safe House.

"In normal circumstances, parents can tell the children to go and play outside," Omar told AFP, adding that not being able to work was also a trigger.

"People lose their jobs," she explained.

"Not knowing when the next supply of bread is going to come from is an other contributing factor to the flare up of tensions."

"You have your disputes and spats and your disagreements, which are normal," said Sandy.

"But when you're in a confined space, you don't get that opportunity to just get in your car and take a drive," she explained. The result: "A volcanic explosion."

President Cyril Ramaphosa has condemned the surge in domestic violence "during a time of such difficulty for our country".

"It is disturbing that... women and girls are being terrorised inside their own homes, forcing them to make desperate calls for help," Ramaphosa said in a emailed weekly note.

But victims who manage to seek help are only the tip of the iceberg.

"When the police come to your door and your abuser is with you, it is very hard to say I need help," Glennie told AFP.

"They (the victim) might be standing in front of you with a black eye, a bloody nose -- they still deny."

Victims who are able to break free would still be unable to travel far due to lockdown restrictions.

Glennie explained that they would first need to apply for a permit in court, adding another layer of complication.

The nature of the lockdown has made us suffer in silence," women's rights militant Brenda Madumise-Pajibo told AFP.

Cronje noted victims did not immediately reach out to Safe House once the lockdown started.

"We were wondering why," Cronje said. "The fear of corona(virus) was maybe bigger than the fear of staying at home."

"As soon as they heard that the lockdown was extended," she added. "They realised what they had gone through and said: (we) can't stand it anymore."

Safe House has since been struggling to find enough shelters and the national helpline is overwhelmed with calls.

"After 10 minutes someone is picking up the call, and then music for another 10 minutes," Omar complained, adding that the time spent waiting "could be a matter of life or death".

But rights groups have been disappointed by the lack of action, claiming they have not received any government support since the announcement.

"The pledge made last year by the president has not been given," said Glennie.

"It is a shame, an absolute shame, at a time when we need it the most."