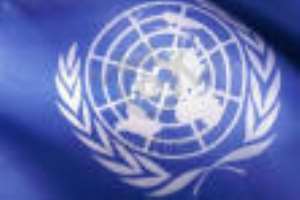 Five Ghanaians peacekeepers are to be honoured by the United Nations as part of activities marking this year's International Day of Peacekeepers today, May 29.


Commander Seth Amoama of the Ghana Armed Forces, currently serving with the UN Department of Peacekeeping Operations in New York, will receive a peacekeeping service medal, a statement signed by Lieutenant Colonel Dzotefe Mensah of the Army Public Affairs Directorate and copied to the Ghana News Agency last Saturday had stated.

The statement said four other officers who died while on duty at different UN Peace Missions would be honoured posthumously.

The rest are; Sergeant Emmanuel Megbetor, who died on September 4, 2005 while serving with the UN Mission in the Democratic Republic of the Congo (MONUC) and Chief Inspector Robert Amoako of the Ghana Police Service, who died on November 21, 2005 while on duty with the United Nations Stabilization Mission in Haiti (MINUSTAH).

They are among 124 peacekeepers being honoured posthumously. Their medals will be received by representatives of the respective permanent missions at the United Nations and forwarded to the next of kin. The medals would be presented by the UN Secretary-General for Peacekeeping, Jean-Marie Guehenmo.

According to the statement, in December 2002, the General Assembly designated May 29 as the International Day of UN Peacekeepers, to pay tribute to all men and women who have served and continue to serve in United Nations Peacekeeping operations for their high level of professionalism, dedication and courage and to honour the memory of those who have lost their lives in the cause of peace.

The date, May 29, was chosen because on that day in 1948, the first UN Peacekeeping Mission, the United Nations Truce Supervision Organisation (UNTSO) began operations with a group of unarmed military observers in Palestine.

UN Peacekeeping, built on almost 60 years of experience in the field, remains an indispensable tool for the Member states to use in tackling threats to international peace and security. Currently, there are almost 90,000 personnel serving on 18 UN Peace Operations on four continents.

This year, Ghana has chosen the theme; "Keeping the Peace without Arms". to focus on the role of military observers, who served unarmed despite all the risks associated with peacekeeping. To honour Ghana's peacekeepers, there would be a flag-raising and wreath-laying ceremony and parade at Independence Square in Accra today.

You're A Blatant Liar; I've Never Attacked Any Religious Lea...
15 minutes ago