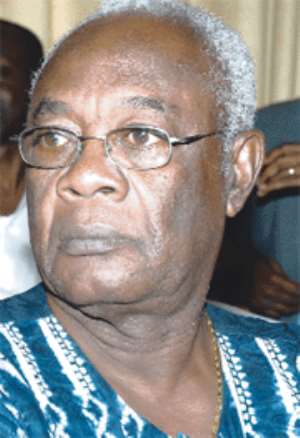 The Supreme Court has ordered the Accra Fast Track High Court to immediately stay proceedings in the case in which three members of the National Democratic Congress (NDC) have challenged the Electoral Commission (EC) to publish the results of the December 2004 general election.

It said the court would be able to assume its task of constitutionally interpreting the matter when the trial judge, Mr Justice V. D. Ofoe, stayed proceedings in the matter.

The three NDC members, Mr Rojo Mettle-Nunoo, Squadron Leader Clend Sowu (retd) and Mr Kofi Portuphy, in November 2005, brought the action against the EC, claiming that the EC failed to gazette the 2004 presidential election as required by law.

The plaintiffs then prayed the Court to give an order ?compelling the defendant to publish the full and complete results of the presidential election of December 7, 2004 in the Ghana Gazette or by any method permitted by law?.

Justice Atuguba, who had argued that the reliefs being sought by the plaintiffs were not ambiguous and, therefore did not need constitutional interpretation, read out the court order after he and the other panel members had given reasons for the ruling.

Consequently, the Supreme Court is expected to interpret whether or not upon a true and proper interpretation of Article 64 (1) of the 1992 Constitution, any citizen who felt aggrieved by or dissatisfied with the declaration contained in the Presidential Election Instrument 2004, had 21 days within which to present a petition to the Supreme Court in challenge of the declaration.

The Supreme Court?s ruling followed an appeal filed by the EC seeking interpretation of the case after the Fast Track High Court on February 14, 2006 ruled that it had jurisdiction to take evidence in order to be satisfied as to whether or not to refer the matter to the Supreme Court.

In its ruling, the Supreme Court held that the matters raised by the EC fell within its domain, adding that Mr Justice Ofoe was carried away by the penchant to take evidence instead of immediately referring the matter to the Supreme Court.

Citing authorities to buttress its decision, the court said it was out of place for the trial judge to decide to take evidence before referring the matter to the Supreme Court, although he (the trial judge) had admitted there were aspects of the matter which needed constitutional interpretation.

The court further held that there was no aspect of ambiguity in the matter, adding that what had arisen was a matter which needed genuine interpretation.

It upheld the EC?s application on the grounds that there were other Ghanaians who needed Constitutional interpretation of the matter.

Earlier, Mr Justice Atuguba dismissed the EC?s application on the grounds that the issues raised by the plaintiffs were not ambiguous because it was clear the decision by the EC to not publish the 2004 Presidential election was contrary to the Constitution and the Presidential Amendment Act.

You're A Blatant Liar; I've Never Attacked Any Religious Lea...
19 minutes ago