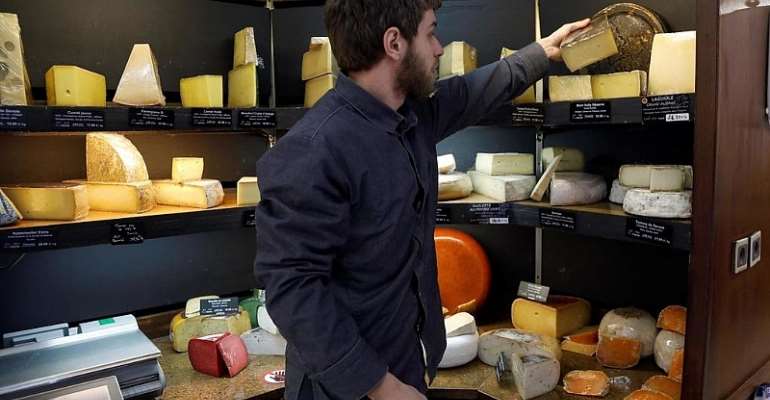 As the coronavirus confinement measures have shut down restaurants and markets, French cheese makers can no longer sell their products. In order to ease the pressure, the government has decided to allow some producers to modify the strict AOP rules.

Spring is when animals are put out to pasture after spending winter in the barns. It's also calving season, and France—and Europe—is awash in milk.

But consumers are not buying it. Cheese counters in French supermarkets have been shuttered, as have open-air markets, under the government's strict lockdown measures to try to curb the spread of the Covid-19 coronavirus.

Particularly hit have been small cheese makers and cooperatives making AOP, or protected origin cheeses. France counts 45 AOP cheeses, which have strict rules about how milk is stored and processed, and how the cheese is aged, stored and distributed.

Farmers and cheese makers in Auvergne, which counts five AOP cheeses have sounded the alarm about a drop in sales. The region counts five AOPs, including Cantal, Salers, Bleu d'Auvergne, Fourme d'Ambert and Saint Nectaire. Dairy farmers producing milk for these cheeses have been asked to reduce milk production by 30 per cent.

The government has decided to temporarily loosen some of the strict rules to qualify for the AOP label for four cheeses, three in the Auvergne region.

Four cheeses
Farmers providing milk for Bleu d'Auvergne and Fourme d'Ambert cheese are now allowed to stock milk up to 60 hours after the last milking, compared to 48 hours previously. Cheese makers can now store young cheeses at below-zero temperatures for a few weeks, to prolong their shelf life.

Saint Nectaire can usually be frozen between 1 April and 31 July to be thawed the next year and aged. The new rules allow cheeses made in March 2020 to be frozen as well.

And dairy farmers  providing milk to make Comté cheese can stock milk longer, and cheese makers can portions of the large cheeses up to five days after they are cut, compared to two days usually.

Cheese solidarity
These small measures can help by allowing for more flexibility in production and longer storage, but cheese makers are calling on consumers to eat local cheese, in solidarity.

While sales of packaged Emmental cheese have soared, according to Lactalis, he world's biggest dairy producer, as people stock up on packaged foods, AOP cheeses have been hit in particularly.

Some cheese makers have setup direct sales, but it is not enough to offset usual sales in supermarkets. One solution is to have supermarkets package pre-cut portions that would have usually be sold at the counter.

Regions are also asking nursing homes to order AOP cheeses, and encouraging schools, when then re-open in May, to order French-made cheese as much as possible.