Covid-19 infection passes its peak in France, but Paris remains a hotspot 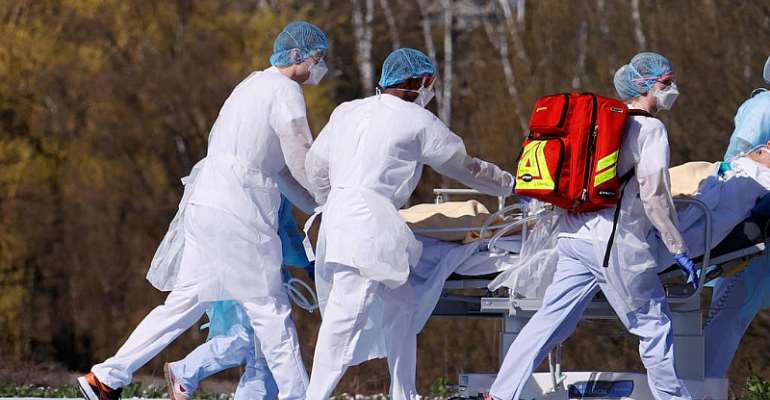 While France registered more than 20,000 deaths related to Covid-19 infection, there are fewer admissions in hospitals and intensive care units. The country is getting ready for a gradual lockdown exit but French scientists warn of potential coronavirus second wave.

The coronavirus curve had passed its peak, said Jérôme Salomon, the head of the French public health authority, on Monday. He said 5,683 patients were receiving intensive care for the virus on 20 April, down from a peak of 7,148 on April 8.

Salomon welcomed data indicating that a person with COVID-19 in France was now infecting on average less than one other person, as opposed to three before the country went into lockdown on 17 March, more than a month ago.

"This is how we will manage to put the brakes on the epidemic," he said. “The fall in the number of people in intensive care has been confirmed but it remains very slight.”

Over 20,000 victims
With 20,265 fatalities from coronavirus infections officially registered on 20 April, France became the fourth country to go beyond that threshold after Italy, Spain and the United States, the hardest hit with over 42,000 fatalities.

President Emmanuel Macron announced that the total lockdown measures enforced since 17 March will be gradually lifted on 11 May. Restaurants, cafés, museums and other cultural venues will, however, remain closed. The usual plethora of summer concerts are not likely to happen.

"It won't be a return to normal life," Prime minister Edouard Philippe said on Sunday as France is to introduce more testing.

Health minister, Olivier Veran said the government was working on making 500,000 coronavirus tests possible per week for people who show symptoms as well for those they had been in contact with.

Fear of a second wave in France

A study published by the Pasteur Institute on 21 April reports that 6% of people living in France are likely to be infected by Covid-19 by 11 May when the lockdown measures will be lifted.

“This [6 per cent] level of immunity is largely inferior to the level of immunity required in order to prevent a second wave of infections if all containment measures are to be lifted,” warns the researchers from Pasteur Institute, CNRS, INSERM who worked in collaboration with the National Health Organsiation (Santé Publique France).

The researchers added that the total lockdown measures put in place managed to reduce the propagation of the coronavirus by 84 per cent.

They believe “70 per cent of the population in France have to be immunised against Covid-19” to prevent a much feared second wave of infections. The researchers added that the “very important efforts will have to be put in place after 11 May to prevent a flare up of the epidemic.

The scientists also established that the Paris region will remain the epicentre of Covid-19 in France with 12,3 per cent of infected cases.

Paris Mayor, Anne Hidalgo, announced free distribution of 500,000 masks by the end of April. She hopes that a total of 2 million masks will be distributed across the capital. Hydroalcoholic gel will distributed, free of charge, in public places.