Lesotho's army withdraws as calls mount for PM to resign 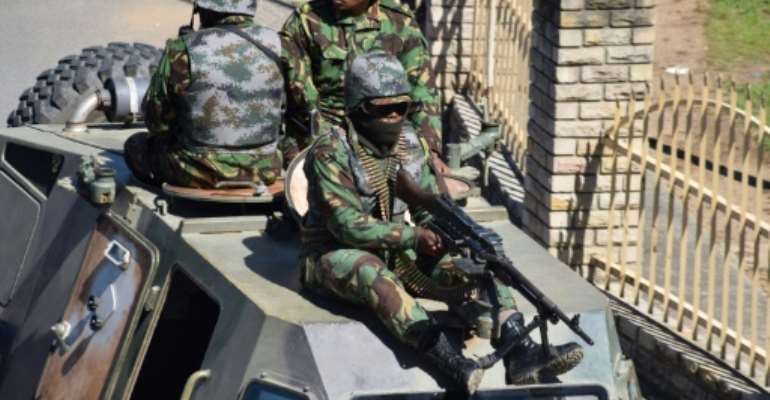 Lesotho troops patrol the Maseru on Saturday after embattled prime minister Thomas Thabane deployed them to "restore order", accusing unnamed law enforcement agencies of undermining democracy. But the army had returned to barracks by Sunday.. By Molise MOLISE (AFP)

Lesotho troops deployed by Prime Minister Thomas Thabane withdrew from the capital's streets on Sunday in a showdown between the octogenerian leader and opponents demanding his resignation.

Thabane faces mounting calls to step down from rivals within his ruling party and opposition groups over suspicions he had a hand in the murder of his estranged wife in 2017.

An AFP journalist in the capital Maseru reported that soldiers backed by armoured vehicles had returned to their barracks by Sunday morning after Thabane had deployed them the day before to "restore order" while accusing unnamed law enforcement agencies of undermining democracy.

The spokesman for the army was not immediately available for comment.

He did not elaborate but many in Maseru suspect South African President Cyril Ramaphosa had dispatched the envoy to the tiny kingdom surrounded by South Africa in a bid to facilitate talks between Thabane and his opponents.

In power since 2017, Thabane, 80, deployed troops on Saturday a day after the constitutional court overturned his decision to suspend parliament for three months.

The premier has been under immense pressure to step down after the police investigations suggested his involvement in the murder of his late wife, Lipolelo Thabane, three years ago.

Dropped by his own party, the Convention of all Basotho (ABC), Thabane has promised to retire by the end of July because of his age but the ABC and the opposition demand his immediate departure.

In a joint statement with opposition groups like the Democratic Congress, Basotho National Party and Popular Front for Democracy, Mahao said "the prime minister's actions clearly points out that he is no longer fit to hold office".

"To protect his own integrity, we therefore advised the prime minister to reconsider and leave office ahead of the time that he had communicated to Basotho."

A highly placed government source said police commissioner Holomo Molibeli, his deputy Paseka Mokete and another senior police officer have been arrested by the army.

The country has been in political turmoil for months.

In March, Thabane imposed a three-month suspension of parliament shortly after the national assembly passed a bill barring him from calling fresh elections if he loses a no-confidence vote hanging over his head.

Last month, he ordered the security forces and intelligence service to probe his ruling All Basotho Convention (ABC) party rivals, whom he accused of plotting to topple his government.

A/R: Pregnant woman allegedly stabbed to death by husband at...
11 minutes ago