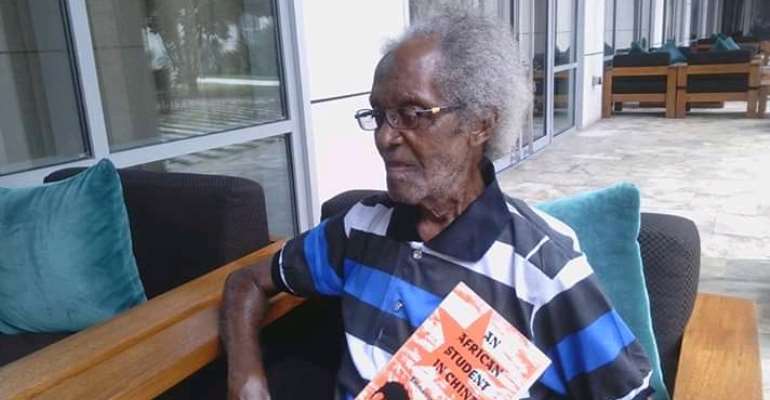 Author Emmanuel John Hevi with a copy of his first book

Recent reports of discrimination against Africans in China in the wake of the new coronavirus pandemic have cast my mind back to Emmanuel John Hevi’s book, An African Student in China, that gives a vivid narrative of his experiences in communist China some 60 years ago .

According to Dr. Sandra Gillespie, a Canadian scholar who had acquainted herself with Mr. Hevi through his writings, Mr. Hevi was the only African student who had written books about his experiences in China - and fifty years later he still has been the only one. “His books remain the touch stone, the only first-person accounts in the field and thus the necessary entry point for scholars all over the world. For the last 50 years, Mr. Hevi - a self-educated man continues to engage the minds of Cambridge, Oxford, and Ivy league scholars across the globe. His books are praised, debated, critiqued, sometime criticized - but he is always referenced, as he must be, in every publication in the field” wrote Sandra in her 2018 eulogy of the man with the Golden Pen.

In this bestseller book, An African Study in China, Emmanuel John Hevi (EJH) posited that the Chinese had so long posed as defenders of the African and the persecuted races that it must really come as a shock to many people to hear that racial discrimination was practiced in China. But he asserted that racial discrimination was not of the kind that sprang spontaneously from the Chinese people. They were "manufactured" directly or indirectly by the Communist Party to make the Africans more pliable for pro-communist moulding. There was a deliberate attempt by the Communist Party to ideologize and make the African accept once and for all the idea of the superiority of Yellow over Black. He recalled a Chinese telling him that ‘Africa is universally known as the most backward continent on earth’.

As part of a complex scheme, EJH noted that many Chinese students, mainly boys, approached the Africans with intent to make friends, but these Chinese were informers who reported on almost everything they did to help the authorities determine the Africans’ level of socialist consciousness. Any girlfriends the Africans took were packed off to prison or to commune farms for hard labour, their only crime being that they dared to make friends with Africans, contrary to the Communist Party's orders.

On the flip side, foreign students were treated better than their Chinese student counterparts, workers, and peasants. “Who would blame a Chinese worker for being hostile to African students when the former who toiled to contribute to the latter’s scholarship funds is left half-starving while the foreigners could eat good food in almost unlimited quantities? And how could Chinese students be expected to put up easily with the fact of being packed eight to a room (ten by twelve feet in size) with a monthly allowance of 10 yuan while foreigners in the same institution lived one or two in a room and had 100 yuan each per month? Could Chinese tutors put up kindly with the idea of being paid 40 yuan monthly, not even half as much as their foreign students got? (source: Harper's Magazine, January 1964).

The renowned author rightly agreed that the African never did a thing to merit the privileged treatment accorded them in China. And it dawned on him that the warmth accorded the Ghanaians in China was because Chinese reserved most cordialities for people whose countries were known, or were expected, to be traveling along the same road as China - to communism.

Fasttrack to the year 2020 under a COVID-19 pandemic that is confounding the world, and China is at it again with reports of discriminating against Africans in China, labelling them as carriers of the virus. For a fair reportage, the Chinese are asserting that there are Africans who have overstayed their visas and out of fear have therefore not tendered their passports for the mandatory COVID-19 tests and subsequent issuance of health certificate. Not allowing oneself to be tested for possible quarantine, if infected, is a major recipe for the spread of the disease and households habouring untested foreigners risk penal action hence the evictions of the unfortunate Africans. Irrespective of the merits or demerits of this stance, one line in Emmanuel John Hevi’s book keeps bouncing back to me – “the racial discrimination is not of the kind that springs spontaneously from the Chinese people”. It lends credence to the fact that most xenophobic attacks are all manufactured, directly or indirectly, by authorities.

I was privileged to have met Mr. Emmanuel John Hevi in 2017 through my good North American friends, Sandra Gillespie and Michael Wolk. Sandra had been tracking to meet this legend for years and coincidentally when we first met in Rwanda in 2016, a Nigerian professor and friend of EJH, Emeritus Professor PAI Obanya gave a ray of hope that the most sought-after publisher on Sino-Africa student experiences was alive. Then through a Ghanaian publisher, Mr. Joojo Ampah, who had publishing rights to some of EJH’s books, and his son, Salvatore, direct contacts were made, and Sandra and Michael made that great missionary journey to Ghana in July 2017. The great rendezvous were full of surprises upon surprises, and EJH, who had reclused into a very private life, almost as a hermit, was presented each day with a new surprise by the Sandra and Michael. A computer on one day (he was not acquainted with its usage), copies of his books that were long gone off the shelves and then a party on August 3 to mark his 87th birthday.

I was privileged to be given the opportunity by my North American friends to interview him on his life and in six days, I had put together what later became his biography. His reflexes were very sharp, and his recollection of events were very accurate, vivid and consistent. It was the desire of Sandra and Mike to have EJH on the silver screens and well celebrated so upon their return to America, a colleague from a local television station in Ghana, Ernest Danso Abiam, and I decided to do this on their behalf. However, just two days to the interview, the television station retrenched many of its staff and the interview was called off.

Sandra and Michael decided to come back to Ghana in July 2018 for a full documentary on EJH and we arranged a full week’s interview with EJH again. Just eight days prior to his journey to Accra in preparation, he was suddenly taken ill and rushed to the Hohoe Government Hospital where he passed on three days later on the night of Tuesday 10th July, 2018.

Alas! A great opportunity was lost to showcase one of the greatest African writers of all times but yet remains unknown and unsung even in his own country. Emmanuel John HEVI was a self-taught person who was fluent in English, French, German, Chinese, Italian and Spanish. Mr. Hevi took to active writing after he returned from a self-imposed exile in Nigeria and authored many books, including:

He wrote eight (8) manuscripts for Ghana Publishing Corporation (GPC) but realising that not even a single one was or would be published, he left his typewriter, picked up a double-barrelled shotgun and became a hunter.

The maltreatments of African in China will continue to remind those of us familiar with the literary works of Emmanuel John Hevi on the philosophy and ideology of the Chinese towards Africa and Africans. May his soul rest in perfect peace.

Ablakwa making noise about Akufo-Addo’s flights for politica...
34 minutes ago