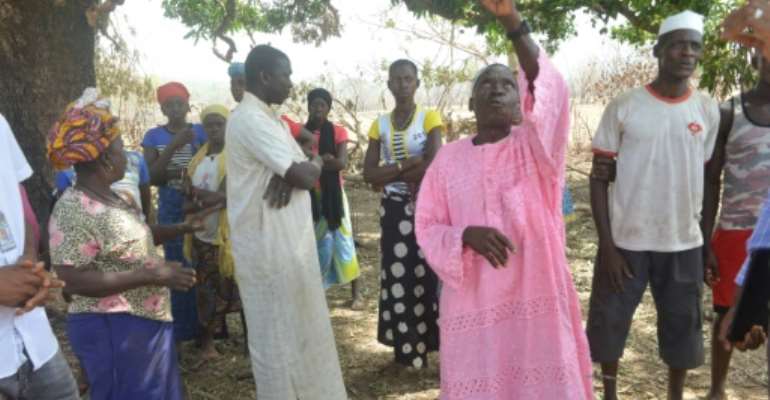 Villagers say the project to build the Souapiti dam, the largest in West Africa, has devastated their lives. By CELLOU BINANI (AFP)

Village elder Naby Soumah stands beneath a lone mango tree, looking at the grey blot on the horizon where builders are putting the finishing touches to West Africa's largest dam.

Around him lies a destroyed peanut field he says was flooded when engineers from the uncompleted dam experimented with closing the stop gates.

The inhabitants of Bouramaya Sousou, an impoverished village in central Guinea, now say they struggle to feed themselves and have not received any compensation -- complaints echoed by hundreds of others in the area.

"There are no traders or intellectuals here. Our children who have studied don't have jobs... We live from this land," Soumah said. "We're hungry."

When the Chinese-financed Souapiti hydroelectric plant comes online, originally planned for the end of the year, it will represent a political coup for Alpha Conde, Guinea's 82-year president.

For decades, leaders of the West African state have dreamt of building a dam straddling the Konkoure River, to power homes and businesses in a country where most people have no mains electricity.

For now the final schedule is unclear as the coronavirus pandemic forces Guinea to introduce measures to stop the spread, including a night-time curfew, shutting borders, banning large gatherings, and closing schools.

Still, the builders of Souapiti dam say once operating it will meet demand for power, even allowing export of surplus electricity to neighbouring states.

But some 16,000 people must relocate first: the dam's reservoir is set to flood the remote bush where they live.

Resettlement has begun, but many of the displaced people say they await compensation for losses and complain that the new villages lack water and suitable farmland.

In a mark of failure, hundreds have returned with their livestock to their old villages of low-slung mud huts.

"They didn't plan anything," said Oumar Aissata Camara, the spokesman for the Souapiti Victims' Association, referring to the dam project.

The displaced villagers are "excessively poor," he added, warning that a botched resettlement could have dire consequences.

A government agency overseeing the process says it is committed to helping the displaced people.

"You can't just come and tear people from their ancestral land," said the agency's spokesman, Alphakaba Diakite, adding that compensation would be paid.

Dubbed West Africa's water tower, Guinea's highlands are the source of the region's major rivers, including the Gambia, the Senegal, the Niger and the Konkoure.

"The potential is enormous," said Jean-Michel Natrella, a hydroelectric engineer with Tractebel, an energy firm supervising the Souapiti dam.

But fresh water is scarce in the nation of some 13 million people. Power cuts, for those with electricity, are also rampant.

The 450-megawatt dam is meant to respond to mounting frustrations over power supply.

"There was no choice but to develop this sector," said Natrella.

French colonial administrators first earmarked the site for hydropower back in 1944, 14 years before Guinea became independent.

Periodic attempts to revive the project over the following decades fell through, often because of lack of money.

Conde won his second presidential election in 2015 -- partly on promises to deliver electricity nationwide -- and the following year, a subsidiary of the China Three Gorges Corporation started building the dam.

Diakite said Conde had been instrumental in securing the roughly $1.3 billion (1.2 billion euros) in financing from China.

"It was Alpha who showed much more leadership," he said, comparing him to past rulers.

Conde is expected to run for president again this year, after controversially changing the constitution in a move that critics brand as a power grab by an increasingly autocratic leader.

Many of the families who have been displaced by the dam say they have been neglected and are uncertain about the future.

In the new settlement of Madina Tayire, near the dam, a dozen residents gathered on a terrace outside the mosque to criticise the lack of water supplies.

There is one, barely functioning, pump for scores of families in the village of yellow concrete houses, off a tarmacked road.

"We suffer from a lack of water," said one man, who did not want to give his name.

The village of Bouramaya Sousou, which lies nearby the dam. Local people say the Chinese-funded scheme has left them in poverty and failed to compensate them for losses. By CELLOU BINANI (AFP)

He said there were positive sides to living in the new village, but life had been easier before.

"In the bush we had the shade, we had our fruit trees," he said.

Human Rights Watch (HRW) says it has recorded a litany of similar complaints -- ranging from poor water access to uncompensated losses for fruit trees and farmland -- in dozens of interviews.

"These people used to drink river water," said Diakite, explaining that they are better off in the modern villages.

"Our contract is social... it's to change the lives of displaced people," he said.

Guinea's energy ministry and China Three Gorges Corporation did not respond to requests for comment.

Camara, the Souapiti Victims' Association spokesman, said that grouping strangers into villages and failing to meet their needs created a potential tinderbox.