John Dramani Mahama, The Man Who Saw Tomorrow And Prepared Ghana For Tomorrow 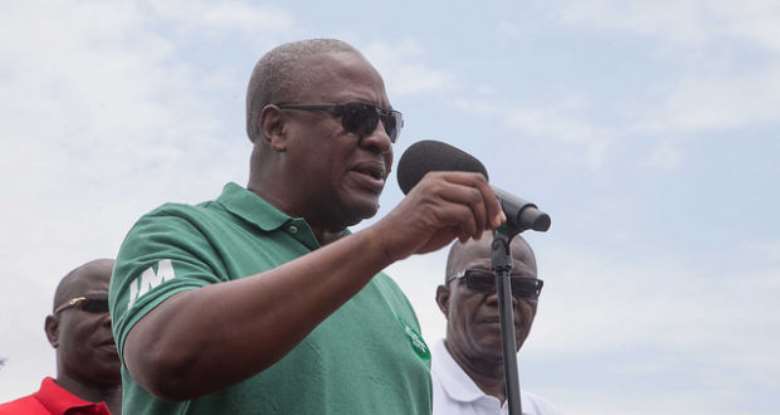 Osagyefo Dr. Kwame Nkrumah is famed globally as a man who saw tomorrow. He was a great political seer, whom God endowed with unbeatable clairvoyance. He could predict the future events with amazing precision. He was venerated world wide because his futuristic and visionary leadership skills.

His Excellency John Dramani Mahama can be likened to the Great Osayefo. He is imbued with such telepathy.He met serious challenges when took over the administration of the country. The decades old power crisis (dumsor) had worsened, prices of our export commodities had plummeted, the single spine salary headache rocked his administration, the 2007/8 global economic recession was still haunting the economy, the country was wholly dependent on other nations for survival, the huge infrastructure deficit was affecting economic activities and was in court for eight months over the 2012 election petition. He had a sound vision about tomorrow and the future, which told him embarking on massive infrastructure development, implementing prudent homegrown economic measures, getting all Ghanaians on board the reconstruction agenda, improving our revenue generation system and repositioning Ghana on the path of self-reliance were the only worthwhile steps of redemption of the country. Because he is futuristic, he is great at forecasting. He can anticipate and think about what is coming. One of the muscles you should flex as a leader with futuristic is getting your vision out of your head and that was exactly what John Mahama did. He prudently planted those seeds that he saw so vividly to really speak to others and ultimately, benefit the people he led.

He always tried to build trust by sharing what he saw and was bold enough to explain his idea. But his opponents mischievously misinterpreted his honesty and boldness and successfully gave different meanings to his wonderful ideas just to incite Ghanaians against his administration. He was very pragmatic and very black and white about what he was doing. His ability to exploit his inner drive to build and grow things, as well as connect with others including his opponents in the making was amazing. He brought people from divergent ideological cultures toward constructive engagement. He invited all the political parties to the Senchi Economic Forum to discuss the economy and develop a comprehensive policy for the country's economic transformation.

Strategic leaders take a broad, long range approach to problem-solving and decision-making that involves objective analysis, thinking ahead, and planning. When Nkrumah embarked on his industrialisation policy, building factories, harbours, schools etc, his opponents ridiculed and undermined his initiatives. Chiefs and opinion leaders were bribed by his political opponents to frustrate his efforts with legal suits and demonstrations. The projects he implemented including the Tema Harbour, the factories became the mainstay of the Ghanaian economy. Mahama, just like his political godfather Nkrumah, reasoned in multiple time frames and planned systematically. He always identified the impact of his decisions on various sectors. Strategic thinking is a difficult leadership skill to acquire because it is as much a mindset as a set of techniques. His opponents found it extremely difficult understanding the web-Ghana he was weaving so resorted to all manner of baseless attacks and propaganda theories.

The Covid-19 pandemic has vindicated Mr Mahama and raised his image further. The policies and projects he implemented that would pull back Ghana from the claws of dependence, huge infrastructure deficit to self sufficiency are is sustaining the system in this difficult times. That special thinking ability and wisdom gave Mahama the foresight of what was to come in the nearest future. He was unjustly lampooned by his political opponents but stayed focused. The Ebola epidemic thought him huge lessons. He embarked on an unprecedented transformation of the health sector against future health crisis. He built ultramodern hospitals across the country, rehabilitated some existing ones, fixed temperature testing devices at our ports, furnished our hospitals with modern medical equipments and trained more health personnel. These projects are the mainstay for the government's response to covid-19 pandemic. The President announced certain lockdown relief measures including free water and electricity supply for three months. These measures would have been meaningless if Mahama had not constructed more water projects and fixed that decades old power crisis. Ghana is today a net exporter of power because of the huge investments the Mahama administration made in the energy sector rated the best in the history of Ghana. The manageable stabilization Ghana has achieved, in the face of this global threat fuelled by the Covid-19 pandemic is attributed to impressive investments Mr Mahama made in the health sector.

Ghana would have been in deep mess had Mr Mahama spent the nation's resources in unprofitable ventures or sustained the low capital expenditure culture. The reality of the Covid-19 has exposed the wisdom in his massive infrastructure development.

Mr Mahama's ardent critics now acknowledge him in their reflective moments, except that the damning things and wicked lies they said about him restrains some of them from making public confession. When the Foreign Minister of Nigeria said that the first time he had the opportunity of listening to Mr Mahama, he told himself that Ghana is blessed, his opponents in Ghana did not get the import of that message. When the former Liberian President told Mr Mahama that Africa will surely need his visionary leadership his successor took that statement lightly. Today, his suggestions are what Mr Akufo-Addo adopts to mitigate the lockdown effect on Ghanaians. His support for the Covid-19 fight has been phenomenal and being commended across the world. Revenue from the oil sector has increased significantly because of the investment he made in the oil and gas sector. The Finance Minister was in Parliament to seek for parliamentary approval to enable government touch the heritage and other oil funds. What would we have done if Mahama wasted our loans and loans on unprofitable ventures, distributed our monies to friends and families or used all to pay our debts.