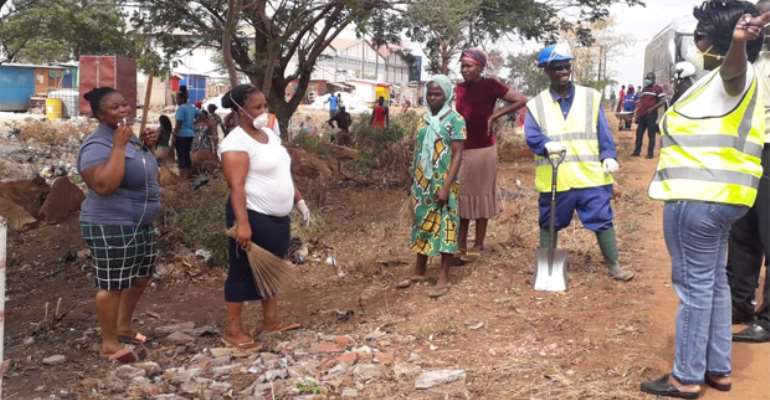 The Ministry of Sanitation and Water Resources (MSWR) in collaboration with the Ministry of Local Government and Rural Development (MLGRD) has collaborated with some security agencies and Zoomlion Waste Management Company to rid the Accra-Tema Motorway of filth.

The two day cleaning exercise which formed part of government’s initiatives to fight COVID 19 disease started on Tuesday in front of the Accra Mall where drainage and refuse heaps along the 19 kilometre stretch of the road were cleared.

Participants consisting of personnel from the Ghana Armed Forces (GAF), Prisons Service and sanitation workers were also supported by nearby residents in cutting down, pruning and burning of weeds that harboured plastic waste.

The Motorway, which became operational in 1965 has over the year suffered from insanitary activities such as littering, open defecation and dumping of refuse along the stretch especially by commuters.

Some dwellers have also indiscriminately erected temporary structures such as wooden kiosks along the stretch leading to the creation of slums.

Sanitation Minister, Cecilia Abena Dapaah tasked some seven municipalities who crisscross the motor way to make the exercise a sustainable one by enforcing sanitation by-laws.

Stringent enforcement of laws she said would deter people from flouting sanitation laws on the motorway which serves as an international road link between Accra and Lome.

“People deliberately litter and expect the assemblies to clean them” she said.

She called for frequent dialogues between the assemblies and residents along the stretch of the road in order to promote the concept of shared responsibility and community involvement in keeping the motorway clean at all times.

The Chief of the Defence Staff Lt Gen Obed Akwa who was present to inspect deployed military personnel urged citizens to as much as possible stay home as directed by the president so as to create a conducive environment for frontline workers to operate.

“It is in your own enlightened self interest to do that and the interest of other members of the community” he said.

He entreated citizens to fully cooperate and comply with directives of security operatives and other frontline workers as they perform their duties of helping curb the spread of the virus.

Also present was the Municipal Chief Executive (MCE) of Ayawaso West Assembly, Sandra Owusu Ahinkorah who issued a stern warning to residents and other commuters of the Motorway that the assembly after the clean up would not spare any recalcitrant individual or groups who flout sanitation bylaws in the assembly.