Trump attack on WHO rocks global efforts to unite against virus 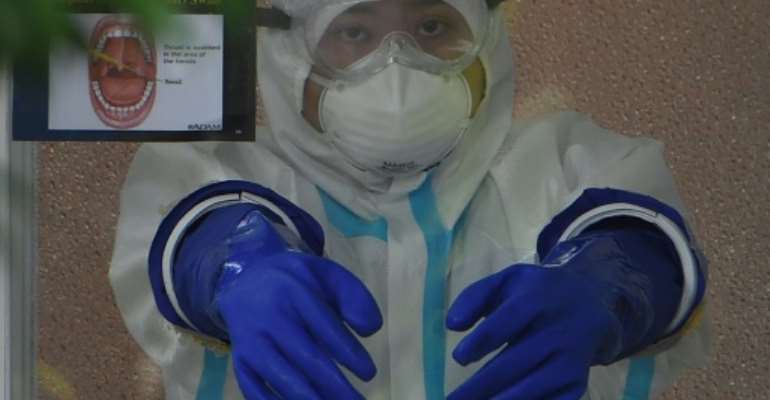 A medical worker prepares to conduct a test for COVID-19 in Manila. By Ted ALJIBE (AFP)

Global efforts to join forces against the coronavirus faltered Wednesday after Donald Trump halted funding for the World Health Organization, igniting criticism from leaders who are urging solidarity in the face of a crippling economic crisis.

The US president's shock move came as a patchwork of countries experiment with loosening lockdown measures, ushering the planet into a new and uncertain phase of a pandemic that has killed more than 125,000 people worldwide and infected at least two million.

In Europe, Denmark became the first country on the badly-hit continent to start reopening schools, while Finland lifted a travel blockade on the Helsinki region.

Italy and Spain have also allowed some businesses to restart after signs both are finally flattening the curve following weeks of punishing death tolls.

But as leaders launch into delicate debates of how to jump-start economies without triggering new waves of infection, Trump rattled efforts at global solidarity by ramping up his blame-game with the WHO, the UN's health agency.

Chart showing how deaths in selected countries have risen.. By John SAEKI (AFP)

The president ordered the US to freeze funding pending a review into the WHO's role in "severely mismanaging and covering up the spread of the coronavirus".

Trump charged that the outbreak could have been contained "with very little death" if the WHO had accurately assessed the situation in China, where the disease broke out late last year.

Leaders around the globe fired back at the US president, who had initially downplayed the dangers of a virus that has now killed more people in the United Sates than any other country on the planet.

Beijing warned that the move would "undermine the international cooperation" at a "critical moment" in the pandemic.

Trump also earned a rebuke from UN chief Antonio Guterres as well as entrepreneur Bill Gates who tweeted that cutting funding was "as dangerous as it sounds".

US President Donald Trump accuded the WHO of "severely mismanaging" the virus outbreak. By MANDEL NGAN (AFP)

"There is no reason justifying this move at a moment when their efforts are needed more than ever to help contain and mitigate the coronavirus pandemic," Josep Borrell said in a tweet.

Trump's controversial attack came the world is facing down a looming economic catastrophe, which the International Monetary Fund has said could see $9 trillion wiped from the global economy in the worst downturn since the 1930s Great Depression.

Underlining the point, Europe's powerhouse Germany has been in recession since March, the government said Wednesday.

The virus-hit Chinese economy, second only to the US, probably contracted for the first time in around three decades in the first quarter, according to an AFP poll of economists.

Meanwhile finance ministers from the G20 -- the world's richest countries -- held virtual talks Wednesday about a possible debt mororatorium for poor states struggling to weather the costs of the pandemic.

With tentative hope the pandemic could be past its peak in some European hotspots, countries are gradually lifting restrictions -- to mixed reception.

A homeless woman in the Indian city of Bangalore opens a food parcel distributed by a charity during the nationwide lockdown. By Manjunath Kiran (AFP)

Children started returning to nurseries, kindergartens and primary schools in parts of Denmark, where other measures, such as the closing of borders, bars, restaurants remained in place.

Finland's Prime Minister Sanna Marin also lifted a travel ban in the Helsinki region even as she urged residents to continue avoiding movement, saying "now is not the right time to go to the summer cottage".

And Spain, which saw another dip in its daily death toll, has permitted work to start some factories and construction sites, though most people remain under strict stay-at-home measures.

Yet warnings abound that a real return to normal is still a long way off.

Spain's Prime Minister Pedro Sanchez said the confinement was working but that "nothing will be the same until a vaccine is found".

Germany was also expected to extend its coronavirus restrictions to May 3, regional government sources said Wednesday.

Harvard scientists, meanwhile, have warned it is unlikely that one-time lockdowns will do the job, predicting that repeated periods of social distancing could be needed into 2022 to avoid overwhelming hospitals.

Elsewhere, governments are struggling to enforce lockdowns in impoverished regions where shutdowns are spreading hunger among the poorest.

A man in a facemask stands on his balcony in Havana, Cuba. By YAMIL LAGE (AFP)

As the virus appeared to be on the retreat in some parts of richer Europe, it is slowly taking hold in Africa, which has seen 15,000 cases and 800 deaths continent-wide -- with fears over growing hunger and possible social unrest.

"You are condemning people to a choice between starving and getting sick," said Jakkie Cilliers at the Pretoria-based Institute for Security Studies (ISS), wrning that lockdowns were unsustainable across much of Africa.

"It's not possible for 10 people living in a tin shack... to not go outside for three weeks."

A similar crisis is emerging in Ecuador, where hunger trumps fear of the virus for residents in rundown areas of the badly affected city of Guayaquil.

A poster in Paris thanks healthcare workers, shopkeepers, police, the post office staff and farmers. By FRANCK FIFE (AFP)

The city's mayor has warned that overstretched medical facilities mean many are dying without the chance to be tested -- a reality that could be be hiding the true extent of the carnage in many poorer places.

People are continuing to "collapse in their houses, in the hospitals, all over the place," said mayor Cynthia Viteri.

However, in parts of the world that saw early outbreaks, there were some hopefully examples of life going on as normal.

Though they were required to wear face masks and gloves, South Koreans nevertheless headed to the polls Wednesday and delivered a strong show of support for President Jae-in, commending his handling of the epidemic.