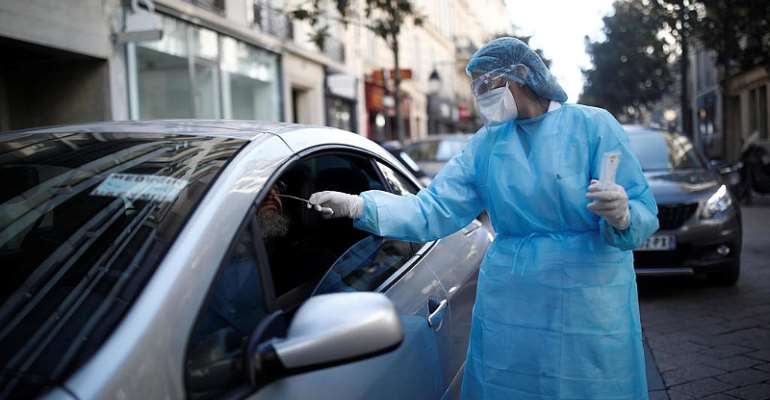 French researchers say that the current confinement restrictions can only be eased gradually, and they recommend large scale testing to isolate anyone who has the covid-19 virus to reduce the fallout of a possible second wave of contamination.

The report was published in English on Sunday by Inserm, France's national health and medical research agency.

Inserm was tasked with evaluating the impact of confinement measures in the Ile-de-France area since 17 March (which includes Paris) put in place to curb the spread of the coronavirus (covid-19) and evaluate the effectiveness of possible exit strategies for managing the post-confinement period.

Italian researcher Vittoria Colizza, one of the co-authors of the study says it is not designed to predict the outcome of lifting restrictions, but rather to present "an evaluation of the effect of different scenarios, based on the measures that have been put in place so far."

Inserm recommends that the lifting of restrictions should not come into effect before May or June at the earliest, and warns that a return to 'normal' will take several weeks.

French President Emmanuel Macron addressed the issue of the lockdown in his televised speech on Monday evening, announcing an extention of confinement until 11 May, and a gradual re-opening of schools from then on.

Small percentage of public immunised
However, in order to avoid a second wave of covid-19, Inserm researchers warn that social distancing will have to continue for the coming months because as yet, most people have not developed immunity to the virus.

According to the study, the population infected by covid-19 as of 5 April was estimated between 1 and 6 percent.

This is similar to an estimation made by Imperial College in London which showed a level of infection of its population between 2,88 and 6,12 percent.

Over the course of confinement, the level of contamination has dropped, going from 3 people infected for every confirmed case to less than one person (0,68 percent).

This is good news for hospital emergency services, which have been overwhelmed with patients, but the study says until the 'group immunity level' is reached (at least 60 percent of the population immunised), the virus will continue to spread and hospitals will again face a strain on their services.

Inserm says the fastest way to come out of confinement is to identify people who have contracted the virus through systematic testing, in order to quickly isolate any cases from the rest of the population.

In depth research and isolation will allow for a partial relief of the socio-economic pressure related to strict confinement, all the while preventing health services from becoming overwhelmed with patients.

If tracing, testing and isolation are done efficiently, and on a grand scale, social distancing measures will be gradually become less strict over time.

This will, according to Inserm, probably require the use of digital tools, as is the case currently in Asia.

Various combinations of measures such as school closures, working from home, reduction of non-essential services, isolation and testing were all taken in to account.

The study showed variations in the number of people working from home and the closure of non essential services in relation to how fast the virus was spreading.

Even if a combination of these measures showed an 80 percent reduction in the number of infections during the peak of the epidemic, researchers say the capacity of hospitals in the Ile-de-France region must be improved in order to manage a second wave of infections.

Reduce strain on hospital services
The study did not take into account the use of protective face masks nor the way the virus would react to a change in season, two aspects which had not benefited from enough scientific research.

"The confinement will probably last quite a but longer, because we can't expect to live normally with this epidemic," warns Colizza, in an interview with Le Monde newspaper.

"Waiting it out has the advantage of keeping the number of infections down and lightening the load for hospital staff."

She goes on to say that confinement above all allows time to prepare logistically and increase the number of tests being carried out. She stresses that it's not just about quantity, but also a question of organisation and human ressources.