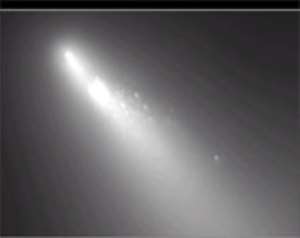 A dying comet is to pass close to Earth on Thursday, becoming the nearest approach by any comet to the planet for two decades.

Comet Schwassmann-Wachmann 3 - also known as Comet 73P - will pass within 10 million kilometres (six million miles) of Earth in a string of dozens of pieces.

New Scientist magazine said that observers should be able to see two of the comet's brightest fragments using a small telescope or binoculars if they look near the constellation of Cygnus.

There could also be a meteor shower from May 19 to June 19 when Earth passes through the end of the comet's trail, the magazine added.

Comets are considered to be fragile clusters of ice and dust that are rubble left over from the making of the solar system.

As they loop around the Sun, the solar heat causes the outer layer of the comet to melt, leaving a trail of dust and water molecules that is reflected in the sun's rays and is seen from Earth as the comet's fiery "tail".

Comet 73P broke into three pieces in 1995 in one of its passages around the Sun and has since disintegrated further.

Virus pushes US hospitals to the brink, India hits record ne...
8 hours ago