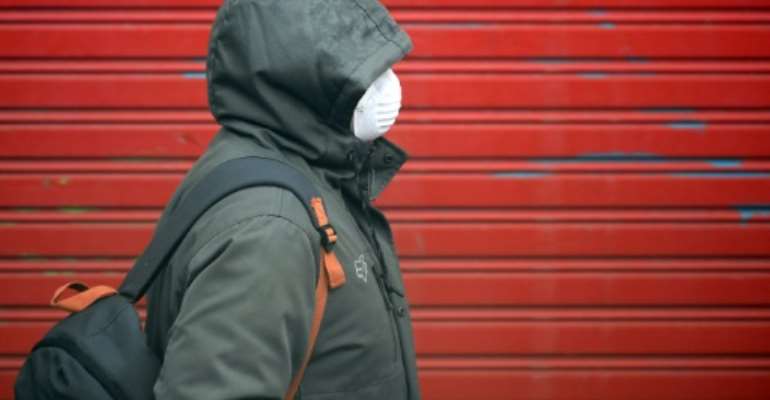 Spain confirmed another 812 deaths in 24 hours from the coronavirus, a slight decline from the previous day. By LLUIS GENE (AFP)

Harsh lockdowns aimed at halting the march of coronavirus around the world widened on Monday to include Moscow's capital as the death toll mounted and fears grew for the fate of the global economy.

The planet is bracing for a long battle against the disease that has so far killed at least 33,000 people, infected more than 700,000 and left two-fifths of the world's population confined to their homes.

From field hospitals and a US military hospital ship in New York, to the empty streets of European capitals and fears of a new wave of COVID-19 in Africa, the virus has changed the face of the world in a few short weeks.

The march of the coronavirus has also transformed the sporting and cultural calender, with the postponed Tokyo 2020 Olympic Games announcing that it will open on July 23 next year.

In Russia, President Vladimir Putin on Monday urged residents of Moscow to respect the lockdown that has seen the closure of all non-essential shops, including restaurants and cafes, in Europe's largest city.

"I ask you to take these forced but absolutely necessary measures... very seriously and completely responsibly," Putin said after regional authorities clamped down because many Muscovites were failing to heed warnings to self-isolate.

Red Square in the heart of Moscow was eerily empty, while the streets were quiet even though traffic could still be seen on the roads.

Anna, a 36-year-old web designer, said the lockdown would be hard for her and her five-year-old daughter. "But I don't want Arina to get sick," she told AFP while on her way to buy some bread. "So of course we will observe the quarantine."

Coronavirus continues to tighten its grip in Europe, which remains the epicentre of the disease with the death toll there passing 25,000 on Monday, according to an AFP tally.

Spain, which has the world's second biggest death toll from the disease after Italy, announced another 812 virus deaths in 24 hours, although it was the first decline since Thursday.

Spain has also joined the United States and Italy in surpassing the number of cases in China, where the disease first emerged in December in the city of Wuhan.

"While the isolation measures have reduced the pressure on intensive care units, in the coming weeks it will be significant," said Maria Jose Sierra of the Spanish health ministry's emergencies centre.

Britain and Italy both warned at the weekend that measures to prevent the spread of the disease would be in place for months to come.

The USNS Comfort medical ship moves up the Hudson River as it arrives on March 30, 2020 in New York. By Bryan R. Smith (AFP)

In Britain the disease has hit high profile figures including Prime Minister Boris Johnson and heir to the throne Prince Charles, who was now finally out of virus isolation, according to royal officials.

The lockdowns are causing hardship across the world, but particularly in cities in Africa and Asia where poverty leaves many people scrabbling to survive on a day-by-day basis.

Bags with food and clothes donated for homeless people hang on a so-called gift fence in Leipzig, eastern Germany. By Ronny Hartmann (AFP)

Africa's biggest city, Lagos, was due to join the global stay-at-home from Monday, with Nigerian President Muhammadu Buhari ordering a two-week lockdown for its 20 million people. The measures, in force from 2200 GMT, also apply to the capital Abuja.

"Two weeks is too long. I don't know how we will cope," said student Abdul Rahim, 25, as he helped his sister sell foodstuffs from a market stall.

"They need to be fed, but there is nothing to eat," vegetable vendor Irene Ruwisi said in the township of Mbare, pointing at her four grandchildren. "How do they expect us to survive?"

A lone cyclist makes his way in the usually bustling part of downtown Harare. By Jekesai NJIKIZANA (AFP)

The economic effects of the shutdown threaten to be felt for years to come, with millions already out of work and governments rushing through huge stimulus plans to keep people and businesses solvent.

Oil prices plunged as worries about the impact of the pandemic on the global economy multiplied, although stock markets reacted differently, with some moving higher as officials moved to deal with the crisis, while others slid further.

Experts in Germany, Europe's economic powerhouse, said the virus would shrink output there this year by up to 5.4 percent.

In a sign that the world is in for a long haul, President Donald Trump on Sunday extended emergency virus restrictions until April 30 for the United States, as his top scientist warned up to 200,000 people could die there.

A charity began setting up a field hospital in New York's Central Park to help take some of the strain while a US hospital ship was preparing to dock in the city.

"The hospitals all over the city are filling up and they need as much help as they can get," said Elliott Tenpenny, a doctor and team leader for Samaritan's Purse COVID-19 Response Team.

The crisis is also testing the balance between civil liberties and the need for restrictions to curb the disease.

Anti-gay bill : Tell foreign missions if they provoke us we'...
28 minutes ago