Kennedy Agyapong Cannot Have It Both Ways on Badu Kobi 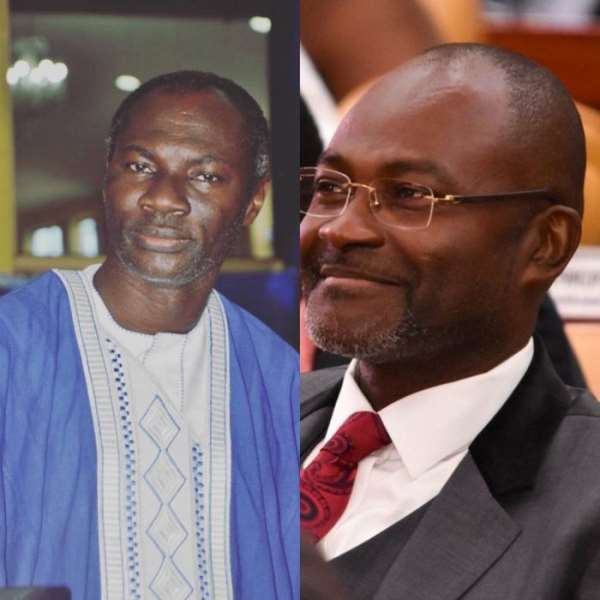 First of all, let me take this privileged opportunity to wish Uncle Nana Addo Dankwa Akufo-Addo – he is actually my “Junior Father” – hearty congratulations on his 76th Birthday and pray for his generous endowment with even more wisdom and visionary foresight by Divine Providence, and long life and good health, as well, on this trying and treacherous season on the cusp of the Coronavirus Pandemic. May God richly bless our homeland Ghana and its generally good-natured citizens and residents as well.

At any rate, I frankly and virulently detest the insufferably crude and cavalier frequency with which the so-called Prophet Emmanuel Badu Kobi, Head and Founder of the Glorious Wave Chapel International, consistently and incessantly attacks President Addo Dankwa Akufo-Addo on virtually a weekly basis at his church. But even as the Mahama “religious” right-hand man poignantly observed recently, it was actually the Assin-Central New Patriotic Party’s Member of Parliament who first literally set the tone and opened the sluice gates for the public vilification and outright slander of the hard-earned image and reputation of Ghana’s former Attorney-General and Minister of Justice in the government of President John Agyekum-Kufuor, when Mr. Kennedy Ohene Agyapong scandalously and publicly made the patently and inescapably malicious claim that in order for anybody to gain direct access to Nana Addo Dankwa Akufo-Addo, the audience seeker had to promptly fork up the payola sum of at least $100,000 (USD) to one of the two Presidential Deputy Chiefs-of-Staff.

The preceding statement of factual rhetorical reality, at least as originally retailed by Mr. Agyapong, of course, absolutely in no way either excuses or authorizes Mr. Badu Kobi to so casually and insolently presume to heretically reduce Nana Akufo-Addo to Mr. Badu Kobi’s own repulsively vulgar and morbidly execrable level of personal culture (See “I’ll Make Sure Badu Kobi’s Fleet of Cars Are Auctioned – Kennedy Agyapong Vows” MyNewsGh.com / Ghanaweb.com 3/15/20). But what is relevant to point out here, and that which motivated the composition of the present column, is the very vindictive promise by the Oman Media Network proprietor to have the personal fleet of Mr. Badu Kobi’s vehicles auctioned by officials of the Ghana Revenue Authority (GRA) for the nonpayment of the requisite import taxes.

The fact of the matter is that the man who recently lambasted the management of the Ghana Trade Fair Company Limited (GTFCL), for legitimately causing the demolition of some obstructive commercial squatter structures on landed property belonging to the GTFCL, has absolutely no right to stipulate the sort of punitive measure that ought to or must be exacted against the proprietor of the Glorious Waves Chapels International. That authority and/or prerogative belongs to the statutorily mandated administrators of the Ghana Revenue Authority. It is also rather scandalous for the self-proclaimed Badu Kobi Nightmare to smugly assert that merely because as an elected Parliamentary Representative, he, Mr. Kennedy Ohene Agyapong, is legally required to pay taxes on any vehicles that the Assin-Central MP imports into the country, automatically makes it imperative for Mr. Badu Kobi to also do the same.

You see, I have been waiting for about a fortnight now, to see or hear any tax-law expert or attorney vigorously challenge Mr. Agyapong on such grossly misleading assertion all to no avail. The fact of the matter is that operatives of all religious establishments, even here in the United States, are entitled to tax exemptions on some specific categories of imports, provided that these heads of religious establishments, including Christian and Muslim and Traditional African Religious Leaders, could prove or demonstrate beyond any shadow or iota of doubt that such categories of imports were, indeed, meant for charitable use and not for commercial gain. It is also quite obvious that some of the vehicles impounded from Mr. Badu Kobi’s residential compound by agents from the GRA were highly likely to have been used for purposes other than charitable causes.

You see, like yours truly, Mr. Agyapong may viscerally resent the rude and slanderous attitude that Mr. Badu Kobi takes to all matters having to do with President Addo Dankwa Akufo-Addo; nevertheless, it goes without saying that the Assin-Central Member of Parliament has absolutely no right, whatsoever, to selectively and arbitrarily use the laws of the land to imperiously punish other citizens and leaders with whom Mr. Agyapong may be in vehement disagreement or may have an axe to grind. In the case involving Mr. Raymond Archer, the sometime Kwamena Ahwoi go-fer, and the Ghana Trade Fair Company Limited, for example, predictably, Mr. Agyapong rather selfishly chose to focus on the profit-and-loss motive and margin rather than the law.

In the Badu Kobi Scandal, as well, the KenCity Network proprietor has, once again, conveniently chosen to tread the self-serving path of personal animus. This is simply not the appropriate method for the democratic and civically righteous pursuit of justice.

PHOTOS: Ghanaians hit the streets of Accra for #FixTheCountr...
42 minutes ago