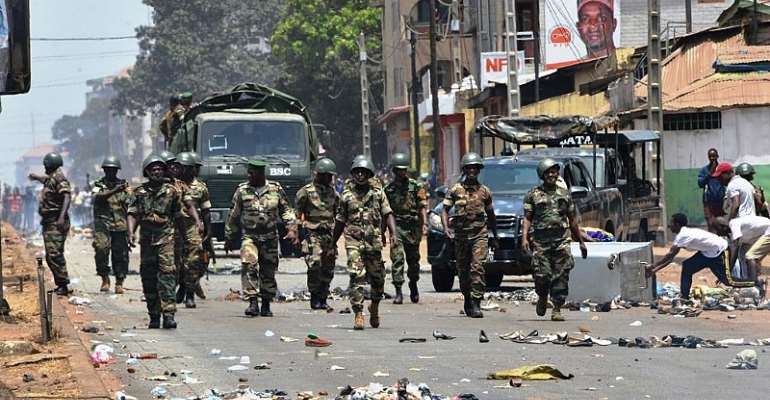 At least 10 people lost their lives during violence on Sunday surrounding Guinea's controversial referendum, according to the opposition. The vote is widely seen as an attempt by President Alpha Conde to change the constitution and clear the way for a third term in office.

Four people died on Sunday, according to the ministry of security, who contested the death toll as stated by the opposition National Front for the Defence of the Constitution (FNDC). A statement by the ministry of security seen by RFI said two people were killed in violence with two others dead, one in an accident and one following a heart attack.

The authorities did not give further details, but added that nine members of the security forces were injured, while the opposition FNDC said their supporters suffered gunshot wounds.

Sunday's vote, including both legislative polls and the constitutional referendum, was pushed through by the government and fiercely opposed by the FNDC. It led to violence in several neighbourhoods across the capital Conakry as well as other cities across the country.

Demonstrators attacked polling stations, stole and burnt voting materials in several towns in the Middle Guinea region and in neighbourhoods of Conakry seen as strongholds of the opposition, according to the ministry of security.

The authorities said several people were arrested for public order offences, possession and use of firearms, destruction of public and private property, arson, assault and battery, and rebellion.

Voting disrupted
Violent clashes took place in Conakry's suburbs between pro and anti-referendum supporters, RFI reported. Tyres were burnt, barricades erected and shops burnt, one member of the FNDC said his home had been attacked on Sunday morning.

Dozens of army pickups full of armed soldiers were deployed with a similar scenario being repeated several times - exchanges of stone throwing and teargas. The violence prevented voting in many areas, for instance in the Simbaya neighbourhood only two polling stations were open compared to an expected 40.

The FNDC has urged its supporters to continue demonstrating. Access to social networks such as Twitter and Facebook was reportedly cut on Saturday night, but restored on Monday morning.

The EU and UN had both expressed their concerns about the vote taking place without international observers as the Ecowas regional bloc, African Union and International Organisation of Francophonie had all pulled out of monitoring missions.