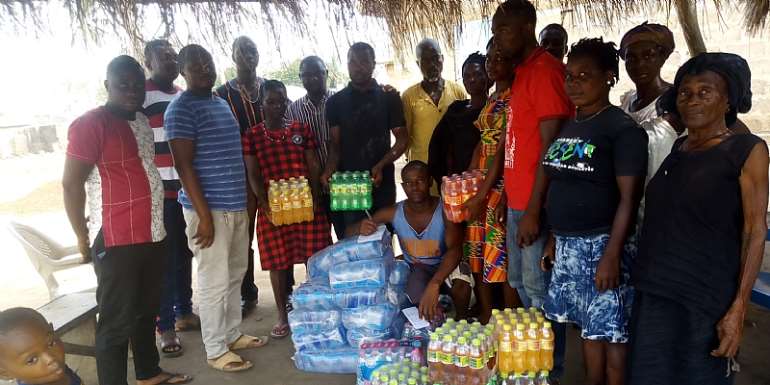 The Kpodzivi Branch of the opposition National Democratic Congress (NDC) in the Akatsi South Constituency of the Volta Region has received a boost for their operations in the coming election in the area.

This follows a donation of soft drinks, water, and others by the Youth Wing of the NDC in the Akatsi South Constituency following the sudden demise of the opposition NDC party's staunch member.

The donation which took place at the family's house of the Late Mr. Kwame Awudi on Friday Morning, 20th March 2020 was necessitated by the Youth organizer, Mr. Selassie Ackuaku and his deputies' desire “to always be with the branches to rejuvenate the NDC at the grassroots.

According to the deputy youths Organizer, Hon. Victus Kportufe who spoke on behalf of the youth wing of the party in the Akatsi South constituency, the decision to support the family was taken following the support the deceased and his families have been giving the party for some time now.

Mr. Selassie Ackuaku has again seized the opportunity to appeal to the bereaved family to continue rallying their supports behind Mr. Bernard Ahiafor, Lawyer by profession and the current member of parliament and the NDC Parliamentary candidate for election 2020 in the Akatsi South Constituency and the Former President John Dramani Mahama.

"Let's work hard and in unionism to make the rescue mission agenda of the great NDC possible," Mr. Ackuaku added.