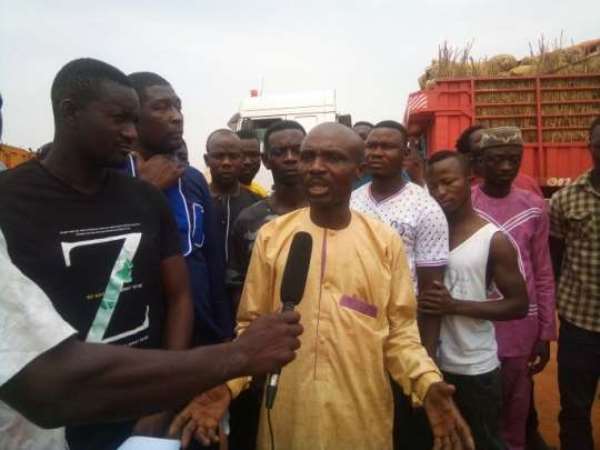 The Ghana Onion Drivers Association, operating along the Ghana, Burkina Faso and Niger routes, has petitioned the Inspector General of Police, the Speaker of Parliament and other stakeholders over alleged Police extortions on the Bawku, Kumasi road.

The Association alleged that for the past three years officers of the Motor Transport Traffic Directorate (MTTD) of the Ghana Police Service, have been unlawfully collecting money from its members at various check points.

It alleged that whenever they transported onion from Niger through Burkina Faso to Ghana, the Police at the checkpoints harassed them and collected monies from them even when their vehicles and load documents were valid and up to date.

Mr Osman Awini Mohammed, the Chairman of the Association in a press statement signed and read by him at a press conference in Kulungugu, Pusiga District, Upper East Region, said the situation was unbearable and had led many of their drivers out of business because the MTTD officers collected all the monies given to them by the vehicle owners and that caused them heavy loses.

Mr Mohammed said the MTTD was a major threat to their development in the driving business as many of their drivers ended up with financial challenges and family feuds that had cost some their marriages.

“When the Articulator trucks depart from Galimi in northern Niger, with full loads of onion with the necessary waybills, they are checked at the Niger-Burkina Faso border accordingly and allowed to pass, the next check point is Burkina Faso- Ghana border at Kulungugu which is also free but all other check points within the country, beginning from Bawku to Kumasi, the police extort money from us,” he said.

“Unfortunately it is when we enter our own motherland Ghana, that we are harassed, from Bawku down to Kumasi, at all the over 20 check points, the MTTD officers demand GH¢20.00 from each truck loaded with onion and about 25 such trucks move to the South each day”.

He said the drivers were usually stopped at midnight for the money or were detained if they failed to pay, “this sometimes force the drivers to over speed in order to escape such harassment from the officers and we all know that such over speeding can cause accidents”.

The Drivers urged stakeholders including the President of the Republic of Ghana to intervene so as to keep them in business.

“We do not understand why these monies are taken from us, there is no legitimate cause to justify this action by the MTTD”.

The checkpoints include Bawku, two, Zebilla, one, Bolgatanga, two, Walewale two, Tamale one, Buipe, one, and Kadelso-Kintampo, three.

Others are Jema, one, Techiman, three, Akumandan, one, Abofour, one, Offinso, one, and Kumasi-Kodie one.

The MTTD Regional Commander, Superintendent Williams Kpormegbe, refuted the allegations and said no such complaint had been brought to his attention.

He said the MTTD officers worked from 0600 hours to 1800 hours in a day and could not be at checkpoints to extort money from drivers at midnight, “the police officers on the road at night are the anti-robbery squad who patrol the roads for security purposes,” he said.

Supt Kpormegbe said some of the drivers who made such allegations were those without the required papers to ply the roads and urged the drivers to go through the right channel to address their grievance.