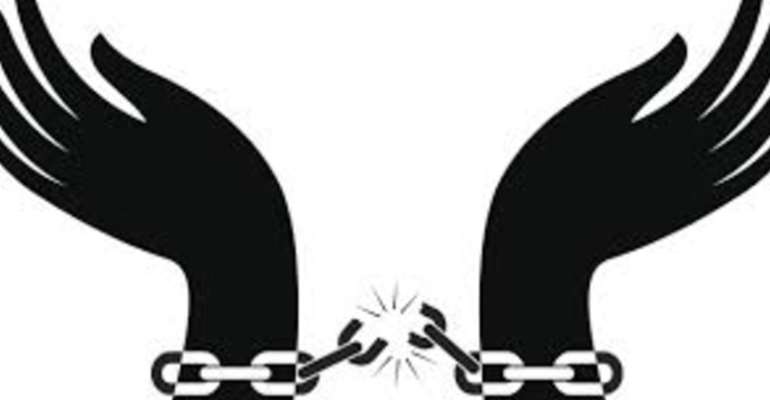 "Under our Colonial Masters, the British, we had a much better life. Public Service was working as laid out in the law with little corruption. Ghana was a clean country. Laws were working, everyone knew what to expect, rules were clear and people followed them. The moment we took over to manage our own affairs, our downfall began. It was a big mistake by Dr. Kwame Nkrumah to have kicked out the White Man from our system...and President Busia to throw out all foreigners from Ghana. Look around you, Karl, what do you see? A country in ruin praising itself to be independent...independent what for, what to show, what to benefit from? Freedom with nothing to show in progress is slavery of the poor mind...that Karl is our problem!" said Jacob Vanderpuye, Greda Estate, Editor of Encyclopedia Africana, 10 Volume Edition of African Heritage (only 3 Volumes were ever published) financed by UNESCO based on the initiative of Ghana`s First President, Dr. Kwame Nkrumah.

An independent Ghana with rich people showing off their Rolls-Royce and Ferraris at Weddings and a country too rich in National resources still begs the White Man for money to support its intervention and feed its people, something these rich Ghanaians can all do by themselves for their own Nation...disgraceful!

Independence is not a party joke but serious business. As often corporated by critics the White Man exploits the Black Man the boomerang must come back in the phrase that Idenpendance comes with Responsibility which means any possible attempt by the White Man to take advantage of the Black Man (political influence, taking natural resources for small money or against established national laws - illegal Timber logging and Galamsey), Ghanaians have the responsibility to stop such attempts and not lambast about possible negative interference by the White Man. A clear and strong mind, truly independent, can never be influenced against his will, while any corrupt mind, that is a poor mind, can easily be twisted and played with by any Foreigner.

The Chinese knew about the corrupt mind of Ghanaian Leaders, paid their wanted bribes to enter the country, opened the way for their Nationals to enter Galamsey (small scale mining reserved only for Ghanaian Nationals) subsequently destroying Ghana`s water bodies and cocoa farms. Vanguard Military Officers arrested few of them triggering meetings with the Chinese Ambassadors advising the President of the well-established cooperation and Chinese support to the country of Ghana. Ghanaian Leaders of all Political Parties pushed their people and country into the hands of the White Man again.

It has become a profitable business by some Law Firms in Germany to convince companies to go into Administration even their balance sheet is positive as such a road, in the end, is more profitable being paid for by the society with Tax Relief and paid salaries by the State etc.. If Ghana would be a company Ghanaians would have to file for Administration and make the rest of the world pay for the disaster caused by past and present Governments. But Ghana´s Leaders are not smart enough to understand such mechanism being short-sighted for their 4 or 8 years maximum period in office.

African Leaders seem to suffer from Munchhausen by Proxy Syndrom (MbPS) on the mind side; destroying with certain interventions on one side their countries and wanting to be called Heroes by admiration for their interventions on the other side. To solve issues of a Nation with the perspective of being on the ground limits the focus to propper help a people. SOS Helicopter crew can see a ship in distress the best from an appropriate hight, not too close not to distaned. Mahatma Gandhi studied Law in London/UK to find wisdom in their Law Books that he could eventually use against the British, went to Sout Africa to free the Indians and practise his skills before finally embarking on his main mission to take India out of the British Empire. Most Black Leaders have studied at the Universities of the White Man, once back in their own countries in power repeat the mistakes from their forefathers.

Ghana, a "Consensus society" (Ghanaians are not more peaceful people in their hearts like other African Nations only by force mostly peaceful as of their location surrounded by French and Muslim countries no way/country to find refuge in case of civil war) which typical sign is people lying to each other to keep peace in the Nation and hide hard truth und unlike developed societies "Fighting Societies" constantly misunderstand hard criticism as insult and personal attacks as most of these people fear up-wake calls but rather enjoy the comfort of lies and mismanagement, something they have been familiar with for generations; known as "Stockholm Syndrom" in which kidnapped people establish a friendly relationship with their kidnappers the longer their ordeal lasts.