Brexite Negotiations, Barley Warns Brits: "We Like You, But We're Not Stupid 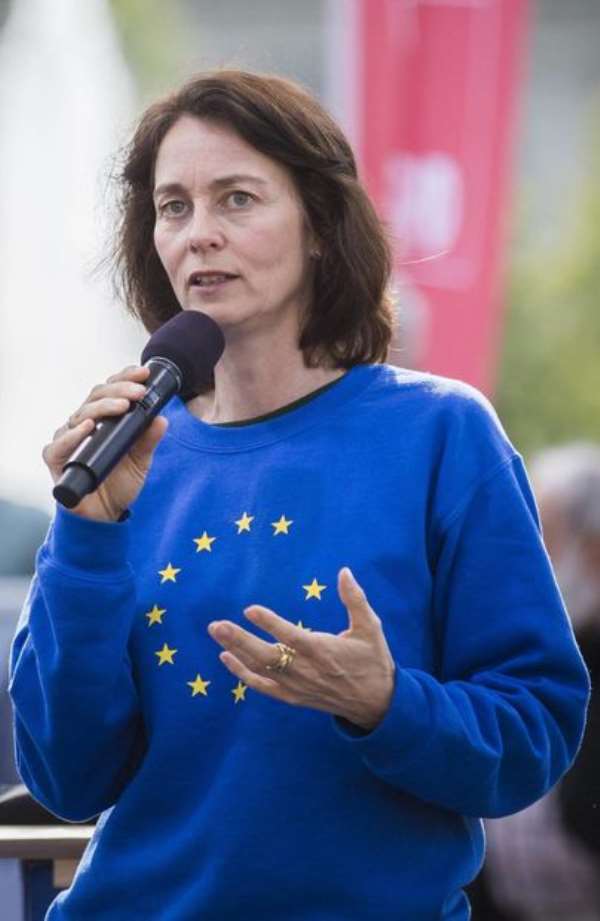 The negotiations are open: Britons and Europeans argue about how their relationship will look after 2021. Katarina Barley, Vice-President of the European Parliament, warns London against exuberance.

Now it's all about speed: London and Brussels are in the middle of the brexite transition period. They need to negotiate a free trade agreement by the end of the year and agree on other areas to shape their future relations. If you subtract the time it will take all 27 remaining EU countries to ratify the agreements, it is a tight schedule.

And the negotiating partners have not exactly come closer since the brexite on 31 January. On the contrary, at the presentation of the British negotiating mandate last week, Prime Minister Boris Johnson announced that he would break off talks altogether if no agreement was in sight by the end of June.

Instead, he would then want the hard brexite. Most recently, the British car industry also called on the government to conclude a comprehensive free trade agreement. And it remained unclear what leverage London could use to push the negotiations in the desired direction.

In Brussels, they look forward to the coming months with a relaxed attitude. Nor does Johnson's announcement to make Great Britain a tax haven for companies shock the Europeans. "Why should we grant you unlimited access to our internal market when at the same time you are trying to outdo us with such competitive advantages," says Katarina Barley, Vice-President of the European Parliament, in an interview with t-online.de. "We like you, but we are not stupid."

Mrs Barley, the negotiations between the EU and Great Britain on the post-brexite era have begun. What do the British and Europeans argue most fiercely about?

Katarina Barley: There are three main points of contention. The biggest construction site is trade, because the British side has so far been acting as if it can still gain access to the single market while failing to meet European Union standards. That will not work. There will also be major discussions on fishing rights. This is a side issue, but it is very important for the relationship between the EU and Britain. It is also important for us as an EU how the rights of EU citizens are protected in Britain after the brexite.

Is it imperative that agreement be reached on all these issues this year?

Definitely in these three areas. Britain must commit to the extent to which it wants to comply with standards in consumer, environmental and health protection. That is absolutely inseparable from the three aspects I have mentioned. There will be no cherry-picking. London must not say: I would like to agree on these things, on others, for example fishing rights, oh, there is still time for that.

On the subject of health: what minimum standards must be observed?

In the EU, we have very clear guidelines; for example, in the case of meat, we lay down what treatment the animals may or may not have received. Let me give you an example: We are against growth hormones in beef production. If the British now say that we want firstly to apply these hormones ourselves and secondly perhaps import hormone-treated beef from the USA, process it and then export it to the EU - we in the EU cannot allow that. All the requirements for health protection for EU citizens must be met on a 1:1 basis.

There are probably dozens of other examples
Yes, for example, equipment safety. In Europe we maintain certain standards. These define: We consider these devices to be safe, others not. The manufacturers undergo complex, lengthy and expensive certification procedures. Under no circumstances can we impose these requirements on the British or allow British goods to be less strictly controlled. The British wanted less bureaucracy through the brexite. That has always been the argument against the EU. In fact, they will get more bureaucracy.

On Twitter recently a Briton got annoyed about the lengthy border controls at Amsterdam airport. He did not vote for this brexite, he wrote - and earned ridicule.

This year it won't be as noticeable yet, because a lot is still being played by the old rules. By 2021 at the latest, however, many Britons will realise what this actually means. In mid-February, the British minister responsible presented new immigration rules. Now only people who can prove a certain minimum salary can immigrate for work. This salary is higher than what a nurse earns in the state health service, but even more so than what is paid in agriculture. British agriculture, like our own, is already having difficulty in finding harvest workers. The British Minister for Agriculture has said that unemployed British people should be trained for this. I look forward to the outcome of this experiment.

In Germany, this approach has failed miserably

Without the helpers from Eastern Europe, nothing will work. With this law, they will no longer have any immigration of care workers either. So I am very curious about the future of British hospitals - which already have a problem with a lack of staff anyway. All I can say is that we in the EU warmly welcome those nurses who would otherwise have gone to the UK.

On Twitter recently a Briton got annoyed about the lengthy border controls at Amsterdam airport. He did not vote for this brexite, he wrote - and earned ridicule. "Absolutely disgusting service at Schiphol airport. 55 minutes we have been stood in the immigration queue. This isn’t the Brexit I voted for".

This year it won't be as noticeable yet, because a lot is still being played by the old rules. By 2021 at the latest, however, many Britons will realise what this actually means. In mid-February, the British minister responsible presented new immigration rules. Now only people who can prove a certain minimum salary can immigrate for work. This salary is higher than what a nurse earns in the state health service, but even more so than what is paid in agriculture. British agriculture, like our own, is already having difficulty in finding harvest workers. The British Minister for Agriculture has said that unemployed British people should be trained for this. I look forward to the outcome of this experiment.

How realistic is it to actually get an agreement in the course of this year?

Very difficult. First of all, it is not just these three areas. There is also, for example, the security aspect, such as the exchange of data on terror suspects, but also the mutual execution of arrest warrants. The second is that we do not even have a year! We are now starting negotiations. At the end of the year, ratification is still required. So we have about eight months net. That is so short that it can really only work if, at the end of it, we say that we will leave certain areas as they are, in accordance with European law.

Which ones could they be?
That is difficult to say. It could happen, especially if the standards are complied with. So far the British have done quite well with consumer protection. As far as worker protection is concerned, things are already getting tighter. At the beginning of the year, the original law stipulated that London would continue to comply with all the employee protection regulations that had been adopted under the EU. Boris Johnson has had this deleted. To say that we continue to comply with the agreements would be a quick fix at many levels. The more the British want to deviate from them, the longer the negotiations will take.

Meanwhile, Boris Johnson has reshuffled his cabinet. What effect could this have on the negotiations?

That remains to be seen. The tendency is clear: Johnson will get rid of anyone who might contradict him. He prefers a streamlined force around him. The influence of Dominic Cummings should not be underestimated.

You mean Chief Aide to Boris Johnson.
Cummings is a hardcore Brexiteer. In my view, the Cabinet reshuffle serves only this purpose: Johnson wants to get through the hard line that he and Cummings have in mind.

If the tight schedule fails, what does that mean for the EU?

Then there are two possibilities: Either Johnson deviates from his dogma that he does not want to be associated with the EU beyond 2020. Let me say quite honestly: I could imagine that if only the ratifications are still outstanding and agreement has been reached on the substance. I would be surprised if it were only to fail because of the ratification phase. The other possibility is a hard brexite, one without an agreement. It is no secret that some on the British side want that. It would mean that the clocks on trade and relations with the UK would be set to zero overnight.

"There will be no cherry-picking," says Katarina Barley, Vice-President of the European Parliament, about the brexite negotiations.

How great is the fear in the EU of a tax haven on their own doorstep?

According to Johnson, the UK will try to gain competitive advantages by offering particularly attractive conditions. Everyone here in Brussels has a clear position on this, from the Council to the Parliament to the Commission: if London wants to go down this road, it will not get privileged access to the internal market. I am not so sure whether it is attractive for a company to be in the British Isles with slightly lower taxes but with no or only very bureaucratic, expensive access to the European internal market of 450 million people. We also have very different tax rates within the EU. Companies are more likely to look for a country within the EU that has low taxes.

I'm half British. I want nothing but good for this country. But I don't want them to think we're idiots. Sometimes I think we are. I always say then: why should we give you unlimited access to our internal market when at the same time you are trying to outdo us with such competitive advantages? We like you, but we are not stupid.