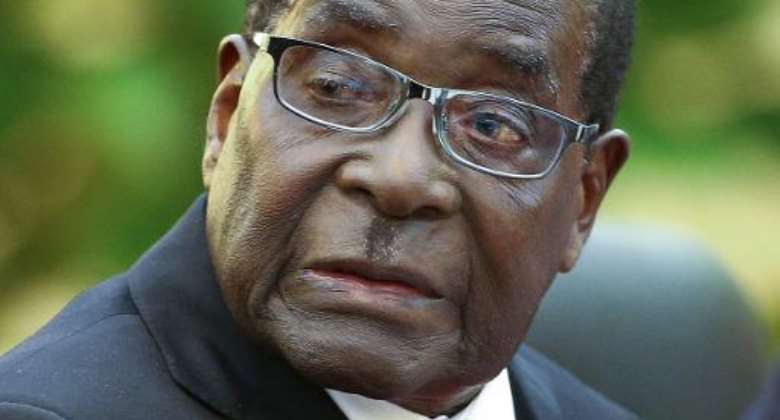 Harare (AFP) - Zimbabwean President Robert Mugabe Thursday defended his wife's nomination to lead the powerful women's wing of the ruling ZANU-PF, as the campaign to succeed him intensifies ahead of a crucial party congress.

"Why are some people so much opposed to it?" said Mugabe to hundreds of supporters who had gathered at the party's headquarters to back him and his wife.

Grace Mugabe, 49, has shaken up the race to succeed her husband, who has ruled Zimbabwe for close to 34 years since independence, by hinting she could run for higher office and lashing out at possible rivals.

"In the constitution of the party there is no where where it is written that the president's wife cannot be a leader in the party," Mugabe said.

The 90-year-old president said he was puzzled that some party supporters were opposed to Grace's nomination when his late first wife Sally once held the same position in the 1980s.

Grace Mugabe is set to be confirmed secretary of the women's league at the December elective congress of ZANU-PF.

Mugabe denounced factionalism and vote buying ahead of the key congress of the former liberation party.

"If you need a post you don't fight for it, you don't buy people to vote for you," he said.

His remarks came after his wife Grace accused Vice President Joice Mujuru of fomenting divisions in the party and plotting to topple Mugabe.

The state media on Thursday joined the fray, accusing Mujuru of "illicit business dealings" and abuse of "office and political status" linked to a Mujuru family-owned duty free shop at the Harare International Airport.

Mujuru and powerful Justice Minister Emmerson Mnangagwa are seen as the leading contenders to replace Mugabe, who has been in power since independence from Britain in 1980.

The battle escalated following Grace Mugabe's surprise nomination a few months ago to lead the women in the party amid speculation she could be aiming to take over from her husband when he steps down or dies.

Mugabe is expected to be confirmed as the party's leader at the congress, but the fight for positions on the powerful politburo could be decisive for the campaign to succeed him.