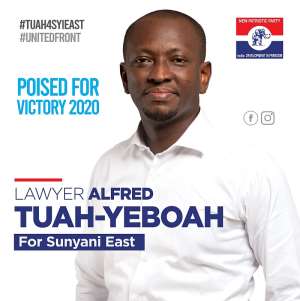 Thirty-two aspirants, including one female, have submitted their nomination forms and are poised to contest in the upcoming parliamentary primaries of the ruling New Patriotic Party (NPP)’s in eleven constituencies in the Bono region on Saturday April 25.

With the exception of the Member of Parliament for Berekum West, Kwaku Agyenim Boateng, who also doubles as the Deputy Minister for Railways, the rest of the incumbent MPs are being challenged with as many as four persons seeking to oust the MP for Wenchi, Prof. George Gyan Baffour, the Minister for Planning.

The four are Albert Ameyaw, a scholar and an astute politician; Kojo Frempong who is a broadcast journalists and currently the Programmes Manager at the Ministry of Business Development, Yaw Opoku Atuahene a former Managing Director of the Agricultural Development Bank and Madam Tina Abrefa Gyan, the only female in the race.

Mr. Siaka Stevens, Deputy Bono Regional Minister and MP for Jaman North is being challenged by three others namely; Eric Yeboah Daniel Fodour Agyeman and Tachi Richmond while Yaw Afful, the MP for Jaman South and Deputy Minister of Aviation will be battling it out with two others – Yeboah Marfo and Alex Awuah.

Another seat which is being fiercely contested is Sunyani West, which is currently being occupied by Ignatius Baffour-Awuah, the Minister of Employment and Labour Relations.

Mr. Baffour-Awuah, who is seeking a fourth term as an MP is being challenged by Bernard Oduro Takyi, a former Presiding Member of the Sunyani West Municipal Assembly and a vociferous contender, and Theophilus Asomah Kyeremeh, an entrepreneur.

Alfred Tuah-Yeboah, a legal practitioner and a former Deputy Brong Ahafo Regional Secretary of the NPP will be locking horns with the incumbent MP for Sunyani East, Kwasi Ameyaw-Cheremeh, who has been the MP for the area since January 2009.

Ali Halidu Maiga, who is even yet to complete his first term in parliament is being challenged by Ransford Osei Amponsah while William Kwasi Sabi, the incumbent MP for Dormaa East will battling it out with Paul Twum Barima and Dr. Kwabena Sarfo.