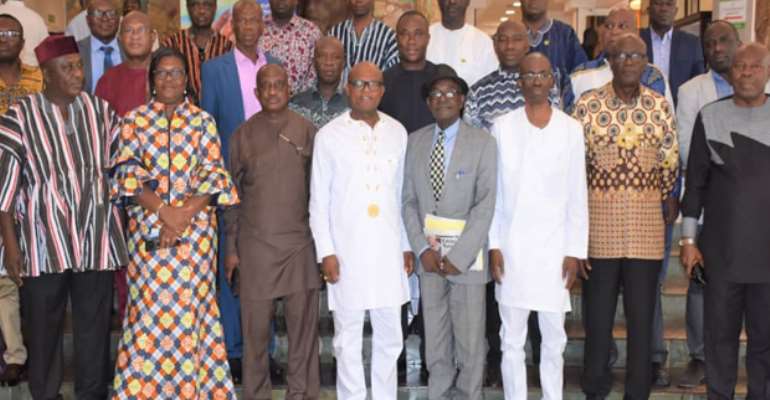 Officals of LGS in a group photograph with Regional Ministers and their Regional Coordinating Directors.

MANAGEMENT OF the Local Government Service (LGS) has signed the 2020 Performance Contract with regional ministers.

At a ceremony held at the Holiday Inn Hotel in Accra last Friday, all 16 Regional Ministers and their respective Regional Coordinating Directors (RCDs) across the country put pen to paper to sign the contract.

The performance contract will among others, serve as a benchmark for assessing the works and overall performance of the Regional Coordinating Directors, thus bringing to the fore their strengths and weaknesses, taking into consideration their behaviour, skills, attitude and knowledge of the job.

In an address read on her behalf, Minister for Local Government and Rural Development, Hajia Alima Mahama, stated that the contract will improve the performance of the regional directors by providing them with the necessary feedback on how well or badly they are performing.

She noted that President Akufo-Addo, in his bid to achieve a 'Ghana Beyond Aid', is economically and socially developing Ghana from the grass roots through the implementation of policies such as the One District, One Factory; One Village, One Dam; Planting for Food and Jobs, and Planting for Export and Rural Development .

Though they were laudable policies, they would not be effective without the supervision of the RCCs through the coordination, backing, monitoring and evaluation of Metropolitan, Municipal and District Assemblies (MMDAs) programmes and activities to drive the process.

“It is therefore, timely to employ such a key strategy of measuring the performance of leadership of the RCCs against set indicators towards the achievement of these policies,” the Minister stated.

She added that the creation of the new regions and districts came with additional responsibilities for local government professionals and that they were expected to use innovative ideas to transform the new RCCs and MMDAs from their infant status to the desired economically viable institutions they wished them to be and urged the LGS to develop special indicators to measure the performance of these new RCCs and MMDAs in order to challenge them to the higher responsibilities.

The Minister also charged the regional ministers and the RCDs to work hard to change the perception by a section of the public that the Local Government Service was incompetent and insensitive to the needs of their people.

Dr Nana Ato Arthur, Head of LGS, explained that the performance contract was to support high level leadership and accountability by the Local Government Service saying “performance is critical in creating a committed workforce needed to support Local and National Development efforts”.

He disclosed that performance contracts over time has solved some challenges including slow delivery of services, inefficient use of resources, disunity among employees, employee dissatisfaction and duplication of roles and duties.

“Performance contract, therefore, should not only be seen as a tool for assessing the performance of RCDs but also as a mechanism for assessing progress of general governance of respective RCCs,” he iterated.