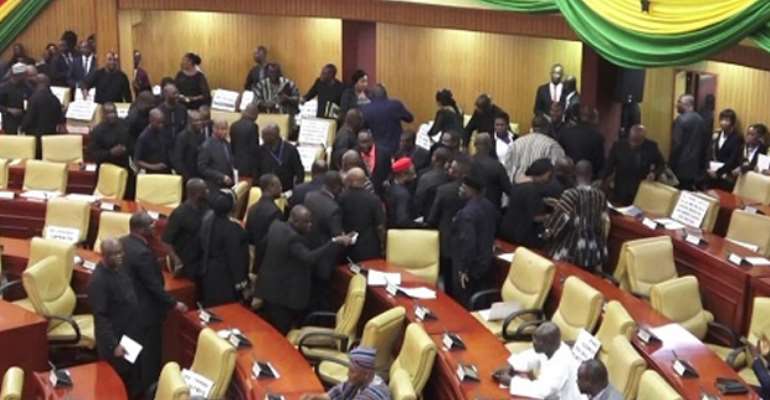 Following the Minority's theatrical show last week when they walked out of Parliament at a time when the President was there to perform one of his duties, a question has been triggered as to whether or not their action did not breach the Constitution.

The “President shall give a State of the Nation Address at the beginning and close of every parliamentary session,” as contained in the Constitution is sacrosanct. It also behoves the members of the House as representatives of the people to sit and listen.

Treating this important feature of the parliamentary calendar as the MPs on the minority side did was as irresponsible as it was comical. Personalities of their standing should as much as possible steer away from the boyish exuberance of a boarding house in senior high schools.

Some of the theatricals of the Minority could be allowed as comical reliefs of sorts, not when a constitutional obligation is breached in the name of a protest over MPs Common Fund, Voters' Register and a so-called tyranny. Sounds surreal and to think that the potpourri of confused stuff is originating from Parliament is hurting.

We long for somebody to test the law regarding the constitutionality or otherwise of the action taken by the NDC MPs. Such judicial action is necessary to obviate future recurrence because the NDC, from intelligence, plans conducting more rough tactics even in Parliament.

The NDC's jokes and pedantic conduct are becoming one too many. For a party which has never liked anything which did not originate from them, there would be more of such crude shows from the Minority.

Will the MPs debate the President's address given the fact that they boycotted the SONA? They deserve hooting should they return to Parliament to do so. Exactly, what would they be debating?

In their weak argument about the NPP then the Minority side boycotting Parliament in 2013, the reason is not far-fetched. The validity of the election was the subject matter of a petition being adjudicated by the Supreme Court. It would have been morally outrageous for the petitioners to go and give credence to a system whose legality they had questioned and, therefore, awaiting its judicial outcome.

Opposition MPs who rely on ruses in their agenda cannot be trusted with the fate of this country.

Even a piece of humour from the President about seats being taken over by the Majority when the next Parliament is constituted has been deliberately presented as a yearning by him for a one-party state.

For anybody to even think that a one-party system is being envisaged in modern Ghana is the apex of mischief.

Those who represent the people should not engage in such pedantic pranks in the name of protest. We want the judicial interpretation of the place of SONA vis a vis the representation of the people by elected MPs.