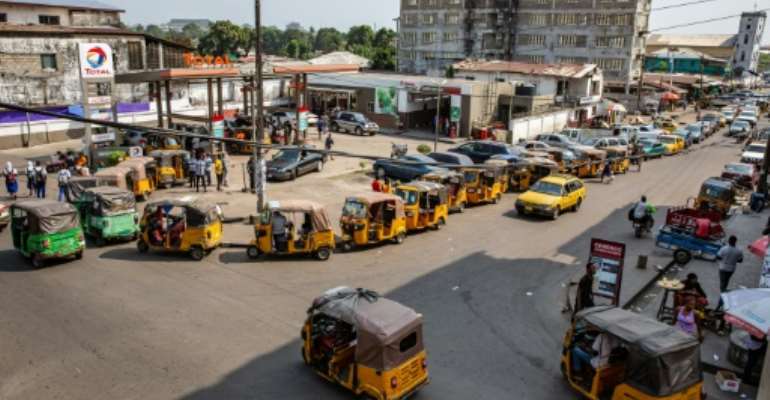 Cars and tuk-tuk taxis often need to wait for hours at fuel stations as Liberia experience petrol a shortage. By Carielle Doe (AFP/File)

Incorrect fuel-reserve figures in the impoverished West African country partly led to the shortage, which has dragged on since late January, an industry official said.

But an undredged port in the capital Monrovia has also prevented large fuel tankers from docking, according to port and government officials.

Consumers are spending less on household items as fuel prices rise, he said, and businesses are operating under capacity.

Liberia suffers frequent fuel shortages, but the current one has lasted an unusually long time. Queues forming before dawn at petrol stations are now commonplace, and scarcity has forced taxis and buses to hike fares.

'I think the kids will miss class today," he added, exhausted after he and his children slept in the car.

A protester holds a placard during a protest earlier this week against the deepening economic crisis. By Carielle Doe (AFP/File)

The shortage is another blow to President George Weah, who is under increasing pressure to improve living conditions in the country of some 4.8 million people.

Inflation is now running at about 30 percent, according to the World Bank, which has incited anger and protests.

Compounding economic difficulties, fuel scarcity means it is harder to move goods around the country.

"My store is empty," said Anthony Kai, who sells dried goods in the town of Zwedru, some 550 kilometres (350 miles) east of Monrovia.

"Very soon the population will lack the necessary things they need," he added.

Fuel distributors which overstated their reserves are also partly to blame for the shortage, according to an official from the Liberia Petroleum Refinery Company (LPRC) who requested anonymity.

The LPRC is a state-owned company charged with ensuring a consistent oil supply.

The greater problem, officials say, is that large petrol tankers have been unable to dock in the port of Monrovia for weeks because of unusually shallow waters.

Silt and detritus have accumulated in the port since summer, when heavy rains prevented crews from dredging, said the managing director of the National Port Authority, Bill Tweahway.

Ships with a draft of more than 10 metres (33 feet) can no longer enter the port, Tweahway said, although smaller ones can still dock, which has averted a crisis.

The government said it would start dredging, after which ships with a draft of over 13 metres would be able to dock.

Liberia is also expanding the port so that more than one vessel can dock at a time, Weah's office told AFP, pointing to the port as the main cause of the fuel shortage.

An importer who declined to be named said that businesses are losing "a huge amount of money" chartering several smaller ships rather than one freighter.

But a foreign official in Monrovia, who declined to be named, said the smaller ships meant that some petrol was still arriving.

"I don't think this is an existential crisis, just a screw-up," he said.

Civil servant Emmanuel Gaye said he would not be able to afford his fare to work if the fuel shortage lasts another week, since it has doubled.

"We can't continue like this," said Solomon Fayah, a driver, sitting in a fuel queue in Monrovia.

Arrest warrant issued for 10 recalcitrant motorists who snub...
51 minutes ago